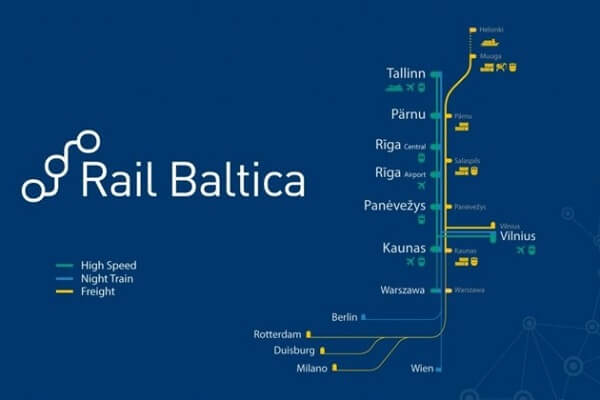 Madrid, Spain (Urban Transport News): The Ministry of Transport and Communications of the Republic of Lithuania, LTG Infra and the Spanish service provider Ardanuy Ingenieria S.A. have signed a contract for the preparation of engineering infrastructure development plans for the Kaunas railway node of the Rail Baltica project. The contract is valued at 1.065 million euros (without VAT).

The completed plan is expected to be approved on September 2022, and the design and construction work is to be completed by late 2026.

Kaunas railway node will become one of the most important logistics centres in Lithuania. Its railway station’s existing passenger transport routes will be supplemented by Rail Baltica’s international passenger rail transportation routes Warsaw-Kaunas-Vilnius and Warsaw-Kaunas-Panevėžys-Riga-Pärnu-Tallinn. Also, in adapting to contemporary logistics trends, we will be continuing the modernisation of the Kaunas intermodal terminal.

According to Sankovski, through the Rail Baltica railway, Kaunas intermodal terminal will host semi-trailers filled with cars, which will be carried in the direction of Latvia and Estonia by road transport by the Via Baltica highway in the near future. Hence, in 2026, Kaunas railway node must be prepared to receive not only trains on the European standard gauge, but also to keep up with the constantly growing demand for passenger and intermodal cargo transport.

When designing the plan, the company will perform engineering surveys of the planned territory, archaeological studies, and prapare a development concept for the planned territory with alternative options for the Rail Baltica railway and its infrastructure objects needed for developing the Kaunas railway node. Upon identifying the best alternative, the company will need to prepare tailored solutions, and perform an evaluation of their environmental impact.

The completed plan will have to outline the development and reconstruction solutions for railway roads, their own buildings, railway stations, the Kaunas intermodal terminal, roads and streets, passenger and bike lanes, as well as engineering infrastructure, for example the heating supply and 110kV, 330 kV electrical grids, gas pipelines, and other engineering network reconstruction and building solutions.

Upon completing the works, reconstruction will be performed on the Kaunas passenger railway station, the Rail Baltica railway bypass for freight train traffic on the route Rokai, and HES – Palemonas, which is currently missing, will be laid down. Based on the environmental impact evaluation results, noise and vibration-reducing solutions will be installed, and the Jiesia, Sąnaša and Rokeliai street railway crossings will be reconstructed to enhance road traffic safety. The Palemonas area will see a pedestrian viaduct reconstructed, and the Kaunas intermodal terminal’s throughput will increase.

Rail Baltica is the largest railway infrastructure project in the Baltic States, upon which the implementation of an electrified European standard gauge railway line will be laid down, connecting Warsaw, Kaunas, Vilnius, Panevėžys, Riga, Tallinn and Pärnu.

The combined length of the Rail Baltica railway line in the Baltic States is 870 km: 392 km in Lithuania, 265 km in Latvia and 213 km in Estonia. In Lithuania, the European standard gauge railway line will pass from the Polish-Lithuanian border to the Lithuanian-Latvian border. In Kaunas city, passenger trains will be arriving at the Kaunas passenger train station, while freight trains will travel via Rokai directly through Palemonas toward Riga and Tallinn. The Rail Baltica project also includes a separate railway line between Kaunas and Vilnius. The project is valued at 5.8 billion euros and is aimed at enhancing mobility and travel opportunities, developing business, tourism and goods exchanges in the region.