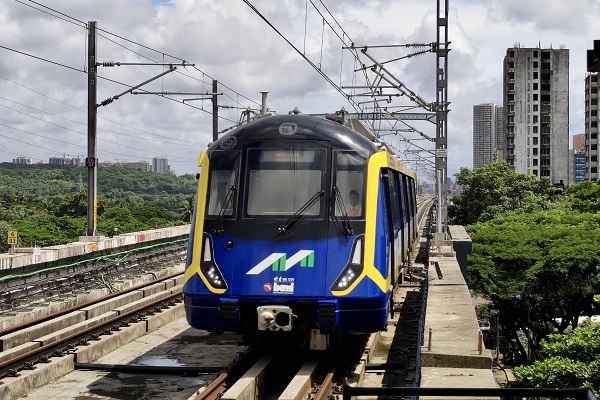 Mumbai, India (Urban Transport News): With the aims to provide world-class passenger facility at Mumbai's busiest Railway Station, Prime Minister Narendra Modi laid the foundation stone for redevelopment of Chhatrapati Shivaji Maharaj Terminus (CSMT) on 19th January 2023 in Mumbai. The redevelopment is planned with a view to decongest the southern heritage node of the terminus, augmentation of facilities, better multi-modal integration and to conserve and restore the world famous iconic structure to its past glory. The station redevelopment project will be done at a cost of over Rs. 1,800 crores.

Providing seamless urban mobility has been one of the key focus areas of the Prime Minister and in line with this, he also dedicated to the nation Mumbai Metro's Line 2A & 7, developed at the cost of around Rs 12,600 crores on the same day. The metro line 2A connecting Dahisar E and DN Nagar (yellow line) is around 18.6 Km long, while metro line 7 connecting Andheri E - Dahisar E (red line) is around 16.5 Km long. The foundation stone of these lines was also laid by the Prime Minister in 2015.

Addressing the gathering, the Prime Minister said that today’s projects will play a major role in making Mumbai a better metropolitan and congratulated the beneficiaries and Mumbaikars. The Prime Minister informed that work in mission mode is being carried out across the country for the advancement of Indian Railways and Mumbai Metro and local trains are also benefiting from this.

He noted that the Government strives to give an experience to the general public of the same advanced services, cleanliness and speed of traveling that were only within the reach of the people who had resources. As a result, the Prime Minister said, the railway stations of today are being developed like airports, and one of the oldest railway stations in India, the Chhatrapati Maharaj Terminus is going to get a facelift as part of this initiative and will be developed as the shining example of the India of the 21st century.

“The main objective is to make better services available for the general public and create ease of traveling experience. He also added that the railway station will not be limited to services related to railways but will also act as a hub for multimodal connectivity. “All modes of transport, be it bus, metro, taxi or auto, every means of transport will be connected under one roof and this will provide seamless connectivity to all travelers” the Prime Minister said as he informed that such multimodal connectivity hubs will be developed in every city.

Prime Minister also launched 'Mumbai One Mobile App' and 'National Common Mobility Card (Mumbai 1)' facility. The app will facilitate ease of travel, can be shown on the entry gates of Metro Stations and supports digital payment to buy tickets through UPI.

The National Common Mobility Card (Mumbai 1) will initially be used in metro corridors and can be extended to other modes of mass public transit including local trains and buses as well. Commuters will not need to carry multiple cards or cash; the NCMC card will enable quick, contactless, digital transactions, thereby easing the process with a seamless experience.