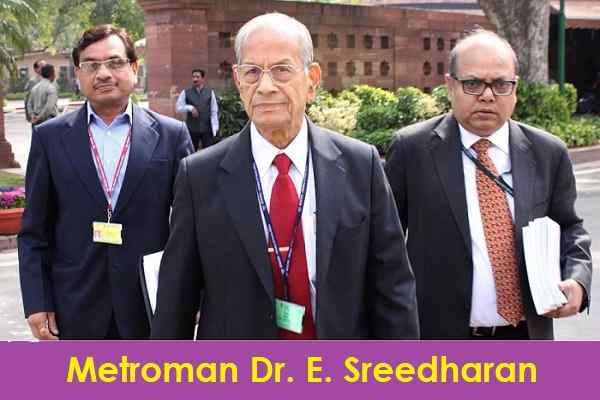 New Delhi (Urban Transport News): Surprising the women, Metroman Dr. E. Sreedharan has written a letter to the Prime Minister of India Narendra Modi asking him not to agree to the Delhi government’s proposal to make free public transport for women commuters. Arvind Kejriwal-led Delhi government had recently announced its decision to give free travel facility to women passengers on DTC buses and Delhi Metro trains.

Sreedharan, who was the Managing Director of Delhi Metro Rail Corporation (DMRC) since its inception and presently working in the capacity of principal advisor to DMRC, requested the Prime Minister for his “personal intervention” in this issue. Blowing his voice, he wrote in his letter of June 10 that one shareholder cannot take a unilateral decision to give concession to one section of the community and push Delhi Metro into inefficiency and bankruptcy. As the DMRC is a joint venture of Central Government and the Delhi Government with equal shareholdings.

Explaining his views and suggestion on the issue, he wrote-

Sir, when the first section of the Delhi Metro was to be opened, I had taken a firm and conscious decision that no one would be given any travel concession on Delhi Metro. This stand was taken to maximize revenues so that Metro fares could be kept low so as to be affordable to ordinary citizens and at the same time, Metro would make sufficient operational surpluses to pay back loans taken from JICA.

Recalling the first inaugural ceremony of Delhi Metro services between Shahdara and Tis Hazari on December 23, 2002, he wrote that the then Prime Minister Atal Bijari Vajpayee bought a ticket for himself when he went to inaugurate the first section of the Delhi Metro. Sreedharan writes,

Now, if ladies are to be given free travel concession in Delhi Metro, it would set an alarming precedence for all other Metros in the country. The argument of Delhi Govt that the revenue losses would be reimbursed to DMRC is a poor solace. The amount involved is about ₹1,000 crores per annum today. This will go on increasing as the Metro network expands and with further fare hikes on the Metro.

He further said that if Delhi Govt's proposal for free travel for women passengers becomes a reality, other sections of commuters, including the “more deserving” like students, the disabled and senior citizens, as well as other Metros in the country would raise similar demands. In response to his letter, Deputy Chief Minister Manish Sisodia wrote to Dr. E. Sreedharan, saying that “he’s surprised and pained” by his viewpoint. Explaining the proposal in brief, Sisodia writes;

The Delhi government will buy around a million coupons in bulk from the DMRC on a daily basis and provide these to women… Why should anyone have any objection to that?

He said that the government’s intention is to ensure women’s safety and encourage use of public transport in the capital to reduce air pollution. He called it a “revolutionary step to empower women” in Delhi.

Sisodia said that after the completion of Phase III of the DMRC, services were designed to have a capacity of 40 lakh passengers daily. He pointed at ridership figures in his letter to Sreedharan and said,

Figures, however, show that DMRC is catering to an average ridership of less than 25 lakh daily… Delhi Metro is running at less than 65% efficiency, and this is pretty bad performance.

Sisodia also asked Dr. Sreedharan to “reconsider his stand and give his blessings for the progressive step”. Urban Transport News have the copy of both letters.