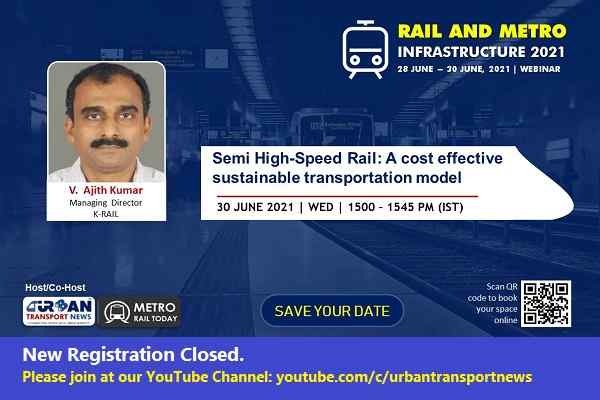 Kerala Rail Development Corporation (KRDCL) or K-Rail, as it is most popularly known-is a Joint Venture Company of Government of Kerala and Ministry of Railways for the Infrastructure Development of Railways in Kerala. K-Rail aims to be a leading organisation in the field of development, redevelopment, operation and maintenance of railway works with passenger amenities of international standards and aims to complete the projects with high standards of safety, comfort, efficiency and value-added services. SilverLine Semi High-Speed Rail Corridor, which envisages world class public transport and sustainable development is the milestone developmental project of KRDCL.Our other major projects are Thalassery-Mysore New Broad-Gauge Line and Nanjangud-Nilambur Railway Line. Apart from these, recently K-Rail has been entrusted the work of updating the detailed estimate of Angamaly- Erumeli Sabari Railway Line.

Kerala is one of the most scenic and popular tourist destinations in India and is among the prime states attracting the largest number of global and domestic tourists. Faster travel offer can attract more tourists to kerala because the current scenario in state is 'more tourist places with lesser transportation system'. The population is distributed across the state of Kerala contrasted with urban conglomerations seen in typical metro cities. The road systems in kerala, though well connected, face severe constraints due to the urban sprawl and the haphazard ribbon development along the routes. In addition to that, about 5,000 people are killed in road accidents every year. About half a lakh people are injured in road accidents each year. The increase in private vehicles creates huge air pollution. In most of the major cities in kerala, there is no adequate space available to expand the existing highway and rail infrastructure, and there is a strong opposition against land acquisition at a wider range. As the development of Highways is very much slow and roads are not capable of bearing the influx of vehicles, most of the people prefer traveling by trains in kerala. But due to numerous level crossings and sharp curves, Even the fastest train takes about 12 hrs to cover a distance of 560 kms from Thiruvananthapuram to Kasaragod with an average speed of 45km/hr. Because of the excessive train traffic in existing double line, some of the sections have capacity utilization of more than 115%. So one key to solve today's such transportation problems is to develop systems that meet the needs of the markets served poorly by the existing transportation infrastructure. The increasing need for movement of people and products at the local, regional, national, and international level has placed extreme demands on developing an integrated transportation system. It is in this context that a model sustainable project like the SilverLine becomes relevant.

As you know a Semi high-speed rail corridor provides a reliable, safer, faster, comfortable, energy efficient, affordable, least obstructive and sustainable transportation system to bring guaranteed improvement to the economy. The heavy cost and the present infrastructure situation are not practically conducive to high-speed trains and hyper loop systems in the state. The construction cost and travel expenses of the high-speed rail corridor, which is urban-centric and has more tunnels and over bridges, is twice of the semi high-speed rail. Considering the short distance between the proposed 11 stations, the distance that a high speed train can cover at a speed of 350 km per hour is very limited and therefore an average passenger doesn't experiences much difference in the travel time. And hence Semi high-speed rail corridor is the best suited, less expensive and more economical rail project option for states like Kerala. That is why Kerala Government came up with this financially viable ambitious project, to make available the facilities of international standards to the common people with an affordable ticket price.

In order to meet the growing demand of Rail passenger traffic and to resolve the overall transportation problems, 'Thiruvananthapuram-Kasaragod Semi High-Speed Rail Project(Silver Line) was introduced as a long term solution. The Silver Line, which can attain the speed up to 200 kmph, can reach north to south in just 4 hours. In the current scenario, Silverline envisions public transport at a cost of only Rs 2.75 per km. According to the detailed project report, the cost of setting up the SilverLine is Rs 63,941 Cr. and is expected to be completed in five years. Of this cost, 52% will be met by foreign loans and the remaining 48% by Central and State Governments and other financial institutions. Since connectivity has become an important issue, the project is a real necessity for fast growing Kerala and it will provide a shifting to sustainable and efficient mode of transport. All-round development will be possible with the realization of metro cities and townships in rural areas along with the completion of the SilverLine project. The semi high-speed rail corridor, which opens up huge investment opportunities in the tourism and industrial sectors, will give a new impetus to the economic security of post-COVID Kerala.

SilverLine is a total green project which enables 'Drives mode shift' from polluting buses and private vehicles. SHSR will adopt latest world class technology in Rail systems. Modern railway stations, Fully Air-conditioned Rolling Stocks with modern passenger amenities & maximum regeneration capability, Power supply with the latest electric traction system, Transit oriented development, 100 % green energy from renewable energy sources and Last mile connectivity with system driven e-vehicle public transport system are the other salient features. Each train set to have nine cars those can carry 675 passengers. 2 plus 2 seats configuration in business class and 3 plus 2 seats configuration in standard class will be provided. It is estimated that 80,000 people will travel on the SilverLine every day in the first year of project completion. By 2052-53, the number of passengers using this public transport will exceed 1.5 Lakhs. Eventually by 2052, it is expected that the SilverLine rail system can reduce approximately 5,94,636 tonnes of carbon dioxide equivalent.

Feasibility Study report and the Detailed Study Report of the SilverLine project were prepared by Paris-based consultancy M/s Systra. The alignment of the SilverLine corridor was determined by conducting an aerial survey using LiDAR remote sensing method. In addition, traffic survey, environmental and social impact assessment study and Scientific Soil test have been completed in connection with the project. The Ministry of Railways has granted In-principle approval for the project and K-Rail has been permitted to take up pre investment activities. A Detailed Project Report (DPR) has been submitted to the Ministry of Railways for final sanction and it is under consideration at Railway Board. The NITI Aayog, the Expenditure Department and Railway board have examined and extend their support to the multilateral loan mobilization plan submitted by KRDCL and made a recommendation to the Department of Economic affairs of the Union Ministry of Finance. HUDCO has already sanctioned a loan of Rs 3,000 crores for the first phase of land acquisition of SilverLine from Kochuveli to Chengannur.

The development of infrastructure and transportation facilities especially faster mode trasportation, and promotion of new destinations will all go a long way in beginning a new chapter in the growth of tourism. Hence SilverLine will be a game-changer providing a modal shift to sustainable and efficient mode of transport.