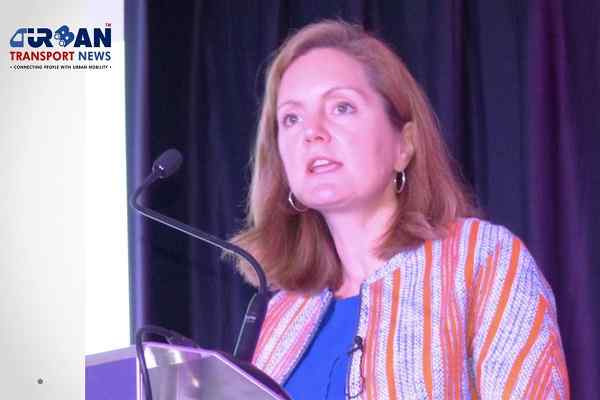 The managing director of Transport for West Midlands has warned that any post-Covid cuts to public transport provision would hit society’s most vulnerable people and hinder efforts to ‘build back better’.

Laura Shoaf, who is also the new chair of the Urban Transport Group, made the remarks in an interview with Leon Daniels, TfL’s former managing director of surface transport.

“If we want to have a clean green equitable recovery from Covid then we need a discussion about the role that public transport, mass transit, integrated networks play in that,” Shoaf told the ITT Hub ‘Lunch with Leon’ podcast last month.

“So in the West Midlands, something like 30% of our population do not have access to a [private] vehicle. They are entirely dependent on the public transport network to get them around. These, in some cases, are the people who have been by far the hardest hit by this virus in the first place and are some of our economically most vulnerable.”

I think our drivers need to know, everybody needs to know, that they are absolute heroes. Because what they are doing is ensuring that those people that have the least choices are able to access employment

Responding to a fear expressed by Daniels that bus drivers may become disheartened as they drive near-empty buses around in the middle of a pandemic,” Shoaf said. “I think our drivers need to know, everybody needs to know, that they are absolute heroes. Because what they are doing is ensuring that those people that have the least choices are able to access employment.

“Put the whole green agenda to one side, because we cannot afford to have a car-based recovery, we must have a green recovery, what they are doing is supporting in some cases our most vulnerable.”

“Everybody that works in the industry knows this. We all know how critical it is. We are passionate about what we do and we believe in it. But actually, now we’re trying to lobby the government to say you cannot afford to not make sure that, in building back better, our networks are fully functioning and supported," Shoaf continued.

“It’s got to be the next argument and I would love to make it so loudly that every single person who’s working on the front line knows just how important they are in getting this country through the crisis that it’s in. And making sure that recovers in a way that is just.

We will come out of the other side of this and realise that it’s hit certain bits of our community the hardest. Those people that who have been hardest hit often are the most reliant on those frontline staff and those public networks operating for them

Quoting an observation that “we may all be in the same storm but we are not all in the same boat”, she added: “We will come out of the other side of this and realise that it’s hit certain bits of our community the hardest. Those people who have been hardest hit often are the most reliant on those frontline staff and those public networks operating for them, in order for them to get to where they need to be.

Shoaf’s remarks were echoed by her host. “Transportation in the widest sense, including mass transit, including public transportation, including freight and logistics, ought to be critical infrastructure the way energy and telecoms is,” said Daniels.

“If there’s a good thing that comes out of this pandemic, and after we’ve had the public enquiry and the press have raked all over it, the government should make sure this is critical infrastructure. Because if we’d not had public transportation and we’d not had freight and logistics, we would have been in a way worse mess than in fact what we’ve been in.”

Bus strategy – ‘give us funding and powers’

Transport for West Midlands boss Laura Shoaf wants the government’s first-ever national bus strategy to give her organization a greater say over bus services in the region.

Shoaf told the ITT Hub ‘Lunch with Leon’ podcast: “There are some things that government can do to give us more levers. We are pushing hugely for the devolution of BSOG [Bus Service Operators Grant] …We can get better outcomes the more funding and powers that are devolved to us.”

Shoaf said her biggest concern was that future government funding would be insufficient to prevent service cuts, and warned that TfWM would not be able to plug the gaps.

“What keeps me up at night is that we are going to wind up with not enough funding, not enough powers and a hollowed-out network … In the West Midlands, bus is our workhorse – 280 million journeys a year are on bus. It’s really, really important … those services are lifelines to people.”