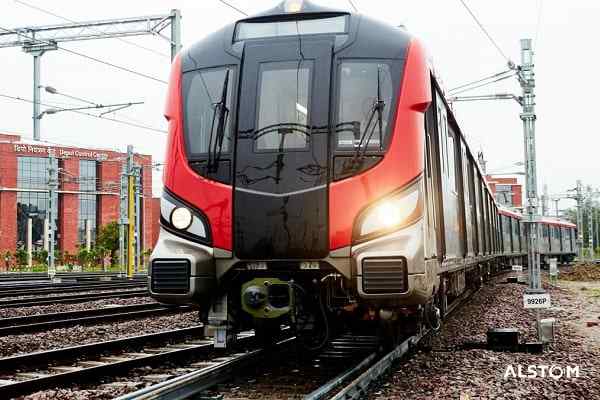 A seven-member EIB delegation recently reviewed several environmental and economic aspects of the ongoing metro projects in Kanpur and Agra during a five-day visit that ended on April 13, 2022. The team consisted of Zoltan Donath, Angeliki Kopsacheili, Esmeralda Francisco, Alexandre Heimann, Heloise Gornall-Thode, Katrin Bock and Srabani Sengupta, tier-2 cities of India have great potential and infrastructure for endorsing such metro systems. “EIB will continue to support UPMRC and its role in India’s development is praiseworthy,” said an EIB official.

“UPMRC’s project delivery model is indeed an example for the world. The construction of Lucknow and Kanpur Metro are certainly the ideal models of transport infrastructure projects that are bringing drastic changes in the lives of the people. Today when the world is encountering devastating effects of climate change; this Green Mobility System can be seen as the most reliable solution for mitigating the impact of pollution,” the official added.

The EIB team expressed satisfaction over the pace of execution of the metro projects under construction in Kanpur and Agra. On the last day of their visit, UPMRC MD Kumar Keshav accompanied by the team of directors and EIB team took a metro train ride from Chaudhary Charan Singh Airport Metro Station to Hazrat Ganj Metro Station. During a metro train ride, the EIB team appreciated the advanced features of the train. They also appreciated the aesthetically constructed state the art and architecture of the metro stations.

Kumar Keshav, while explaining the nuances of the intricately designed architecture of the metro stations to the EIB team said, “All the metro stations of the Lucknow Metro reflect the essence of local culture. The chikan-kari impressions on the walls of the Hazrat Ganj Metro station represent the local embroidery skills of the artisans.” He further said, “Metro is amongst the robust modes of transport which not only save time and money but also provide world class comfort to the people. We are committed to providing a safe, secure and comfortable traveling experience to the commuters.”

“Uttar Pradesh is the most populated state in India in terms of demographics. Today it has the maximum number of operational metro rail networks. In the coming years, these metro rail networks are expected to increase manifolds. The life of people in Uttar Pradesh is already witnessing a revolutionary change due to the commencement of metro rail. We will indeed keep on putting our best efforts in this direction and work for the betterment of the people. Considering the future prospects in mind, we will keep on striving hard in our endeavors to provide unparalleled services to the people of Uttar Pradesh,” said Kumar Keshav.

The EIB team also met Durga Shankar Mishra, Chief Secretary, Government of Uttar Pradesh. Mishra highlighted the fast progress of Uttar Pradesh in the presence of the EIB team. He also praised the role of UPMRC for accruing the fastest construction of the metro network in Uttar Pradesh. “Uttar Pradesh is a large state with immense potential. Metro is operational in 780 KMs and another 1,100 KMs are under construction. India is very dynamic in terms of developing metro systems. Metro is bringing change in the routine life of commuters. It is decreasing the carbon footprint and traffic congestion in various cities,” said Mishra.

“The government of Uttar Pradesh is committed in its resolve to deliver all the projects within the stipulated timelines. Therefore to serve this purpose, it has adopted a smart approach and project monitoring system which ensures that every task of development is carried in sync with our expectations,” Mishra added.

Meanwhile, the EIB delegation had a detailed discussion with Kumar Keshav and Directors at the Lucknow Metro Headquarters. All the senior officials from UPMRC participated in this meeting. The EIB team praised the hard work and incessant efforts of the UPMRC team in maintaining world-class standards in the upkeep of operational and under-construction metro projects.