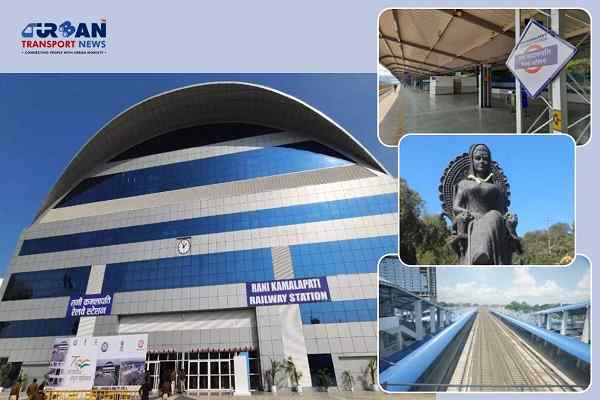 This is the first world class railway station in Madhya Pradesh and redeveloped in Public Private Partnership (PPP) mode. The station has been designed as a green building with modern world class amenities that also takes into account ease of mobility for divyangjans. The station is also developed as a hub for integrated multi-modal transport systems.

Today the country's first ISO certified, first PPP model based railway station has been dedicated to the country as Rani Kamlapati Railway Station. The facilities which were once available in the airport are now being found in the railway station.

"Today's India is not only making record investments for the construction of modern infrastructure, it is also ensuring that projects are not delayed, there is no obstacle. PM Gatishakti National Master Plan started recently, will help the country in fulfilling this resolution," he added.

1. The station has been designed as a multi model transit hub, after examining Key international case studies on station development and also property development were looked across the globe to put international benchmarks and best practices at optimum costs.

2. The Station will have central air space concourse of 84m long and 36m wide equipped with amenities for waiting and seating. This shall ensure minimal congestion and loading on platforms to avoid any mishaps or overcrowding.

3. To avoid any chance of mishaps or stampede scenario, there will be complete segregation between arriving and departing passengers. A smooth flow of passengers shall be ensured through the planned station user movement.

4. Station is planned as differently abled friendly. International practices and Indian norms have been taken into consideration to ensure its adherence. Provision of 6 nos. lifts, 11 nos. escalators and 3 nos. travelators have been made for easy access to platforms and concourse.

5. To ensure seamless flow of passengers in all-weather conditions and better passenger movement, two underpasses of 4m each provided for arriving passenger.

6. The Station will have dedicated approach roads for traffic to Railway station along-with municipal roads with its integration in circulating areas. This shall ensure easy ingress/exit along with convenient parking provisions without creating a traffic block and congestion on the city roads.

7. Station will have dedicated pick up and drop off parking facilities for the station users. Provision of parking for approximate 300 cars, 850 two wheelers, Rickshaws, Taxi & buses have been made.

8. Station shall be operated and maintained by the private sector concessionaire under the supervision of IRSDC with an ISO 9001:2000 certification or a substitute thereof for all the passenger amenities at the station area.

9. Phased development approach undertaken to ensure revamping and capacity addition in a modular development way at a later period of time when passenger/station users increase.

10. Station will comply with NFPA (National Fire Protection Act) to mitigate any such fire mishap at a public place.

11. In case of emergency, station premises is planned to be evacuated in 4 minutes and passengers can reach respective designated points of safety in 6 minutes.

12. Extensive reuse of water is planed with Zero discharge technology being put into place for sewage systems. Approximately 6800 sqm is identified for soft land scaping and 7300 sqm for hard land scaping.

13. To ensure cleaner energy from renewable and non-conventional energy, provisions for solar energy generation is provided in station. Adequate provision of rainwater harvesting has been made at identified locations.

The Rani Kamlapati Railway station has been redeveloped at the cost of Rs 450 crores in 21,331 Sq. metres area.

The Letter of Acceptance (LoA) was issued to the selected developer i.e Consortium of M/s Bansal Construction Works Pvt. Ltd., (Lead Member) and M/s Prakash Asphaltings & Toll Highways (India) Ltd. (Consortium Member) on June 7, 2016. The lease for commercial development is for 45 years and licence period for station O & M is for three years of construction followed by 5 years of O&M. This station is made ready in five years.