Know all about the iconic Chenab Bridge, World's Highest Railway Bridge in India 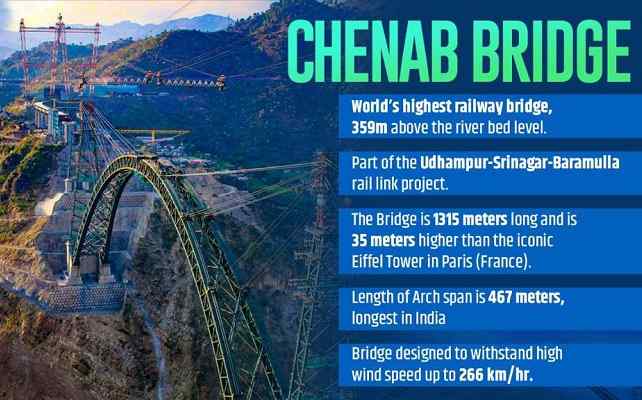 Indian Railways on April 5, 2021, completed the Arch closure of the iconic Chenab Bridge which is the world's highest railway bridge. This is a major step towards the completion of the Udhampur-Srinagar-Baramulla Rail Link Project (USBRL) project.

Chenab Bridge is part of the Udhampur-Srinagar-Baramulla Rail Link Project (USBRL), which set an important construction milestone with the completion of the steel arch of the iconic Chenab Bridge. This was one of the most difficult parts of the bridge over Chenab.

This achievement is a major leap towards the completion of the 111 k.m. long winding stretch from Katra to Banihal. It is arguably the biggest civil-engineering challenge faced by any railway project in India in recent history.

The 5.6-meter last piece of metal was fitted at the highest point and joined the two arms of the arch that currently stretch towards each other from both the banks of the river. This completed the shape of the arch that will then loom over the treacherous Chenab, flowing some 359 metres below.

After completion of the arch work, removal of the stay cables, filling of the concrete in the arch rib, erection of the steel trestle, launching of the viaduct and track laying work will be taken up.

Salient Features of the Arch of the iconic Chenab Bridge

Some Unique Features of Chenab Bridge

Major Contractors involved in this project