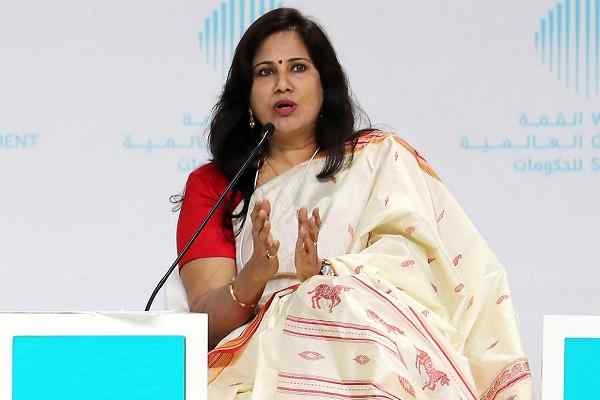 Karuna Gopal, is an Internationally acclaimed Thought Leader, Keynote Speaker and Advisor on Smart Cities. She is the Founder President of the Foundation for Futuristic Cities, a think tank that has influenced Urban Transformation in India for over a decade.

Ms. Gopal contributed to the design of the ‘100 Smart Cities Mission‘ of India and has been invited to speak at the launch of the Mission by the Prime Minister. Her innovation SCULPT your CITY has shaped the Mission guidelines and has been declared a National Best Practice. Governments of Singapore, Sweden, UK, Philippines, UAE, Turkey, Israel, and the USA have invited her for inputs on Smart Governance.
In the past, she served as an Urban Expert for The WORLD BANK, DFID (Department for International Development, UK), USAID (United States Agency for International Development) & ADB (Asian Development Bank).
In 2015, Ms. Gopal was a senior advisor to the Union Ministry for Housing and Urban Affairs on behalf of Bill and Melinda Gates Foundation. She was also one of the urban experts to have carried out a mid-course evaluation of the National Mission Program ‘Clean India – Swacch Bharat Abhiyan on behalf of the Asian Development Bank (ADB).
In 2010 as a member of the Chief Minister's Advisory Council of Andhra Pradesh (erstwhile united Andhra Pradesh) she was instrumental in forging a Sister State Partnership between Washington State (USA) and Andhra Pradesh. Ms. Gopal taught senior IAS officers at India’s Premier Academy, LBSNAA (Lal Bahadur Shastri National Academy of Administration) Mussoorie, WBI (World Bank Institute) ISB (Indian School of Business), ASCI (Administrative Staff College of India) & CGG (Center for Good Governance).
She chaired conferences with Parliamentarians from UK and India in 2016 in London. Ms. Gopal was offered an ‘Eminent Member’ position at RICS (Royal Society for Chartered Surveyors), UK. Ms. Gopal has been Interviewed widely both by National and International Media like the ECONOMIST, Channel News Asia, The National, Khaleej Times, La Tribune, Eco-Business, National Geographic, and World Economic Forum etc.
Her articles have been incorporated into Parliamentary Documentation of Lok Sabha for their policy relevance. Ms. Gopal attended the Harvard Kennedy School of Government and also participated in IVLP (International Visitor Leadership Program) a flagship program of the US Government for Foreign Leaders. She was a member of the Speaker delegation on Smart Cities at COP21-UNFCCC (United Nations Framework Convention on Climate Change) PARIS 2015.
She chairs and addresses conferences around the world and is a special invitee to meetings of FII (Foreign Institutional Investors) exploring investments into India. Her current initiative SURGE (Smart Urbanization Reinventing Growth with Equity) is about transformative policies for ushering a NEW INDIA. Ms. Gopal has been inducted into BJP, (Bharatiya Janata Party) in 2014 and she hails from a family of freedom fighters and IAS officers.