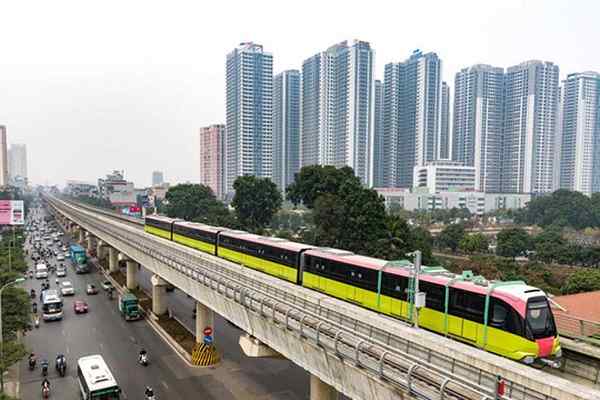 A total of 13 (4-cars) Rolling Stock (Metro Trains) for this line is supplied by Chinese firm CRRC. First train was delivered in March 2017. The train is using Third Rail DC to ensure safety, stability and urban landscape.

There are more than 5 million motorbikes on the roads in Hanoi, but with the construction of nine more lines by 2030, local authorities aim to reduce the traffic and pollution for which the city is notorious.

After years of delays and almost a doubling of production costs, the first train left Cat Linh station, near the centre, to begin a 13km journey to Ha Dong in the east of the country.

"I decided to give it a try because I was curious. I am very happy to be able to take a ride after all the delays," said Nguyen Thi Thu, Vietnam's Transport Minister. The line 2A has taken a decade to complete, with interruptions due to security concerns and rising costs to blame, driving up spending from 476 million to nearly 780 million euros.

Hanoi, which has a population of 9 million, is known worldwide for the density of motorbikes that fill the streets and run amok, endangering the lives of pedestrians.

“I hope the project will create the dominations to promote the acceleration of an urban railway projects in Hanoi and Ho Chi Minh City. Firmly, I will experience the train because we have been waited for so long. Moreover, this is also the railway project whereas Vinh Hung provides many product categories such as Anchors System, Bridge Bearings, Expansion Joints, Pre-stressed cables and other structural steel products,” commented Mr. Vo Ta Luong, General Director of Vinh Hung Trading, Consulting and Construction Joint Stock Company.

Buses are the only other form of available transport and are used by only one in five Vietnamese. Traffic, however, is considered one of the main sources of air pollution in the capital by Hanoi's environmental protection department.

Transport ministry official Vu Hong Son says the new urban metro will address many of these problems, but it is unclear whether residents will easily part with their motorbikes, because 'it takes a long time to change people's habits'.

Hanoi Metro - At a glance