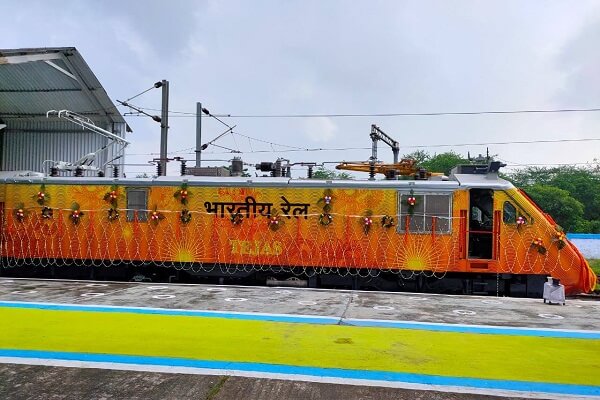 These two WAP-5 (35012-35013) type electric locomotives are of 6000 HP capacity each and both are equipped with latest IGBT based propulsion system capable to run at 160kmph each. These two locos will work in Push-Pull mode for operations in premium passenger trains.

The Driver desks has also been ergonomically re-modified for improving the maneuvering skill of loco pilots. Composite converters are also provided in these locos to directly supply power to the coaches and pantry cars thus eliminating the need of separate diesel power generator cars.

These are noise free, pollution free & environment friendly Green locomotives which are more energy efficient and requires less maintenance and will also save lots of loco shunting time. These locomotives shall be utilized to haul the prestigious & premium express passenger trains over Indian Railways.

What is Push-Pull Technology

Under the 'push-pull' arrangement each locomotive is connected to each end of the train and will communicate through wired train bus. Each locomotive is designed in such a way that one cab is Aerodynamic in shape and other cab facing the coach side is flat in order to reduce the air drag drastically at higher speed. This increases the energy efficiency of the train and makes it dynamically more stable at higher speed.

The maximum tractive effort of a single WAP5 locomotives is 260 kN. It can haul upto 16 coaches. The push pull arrangement with a maximum 12000 HP provides solution to the need of longer trains like Rajdhani with one loco at front called master with loco pilot and the other in rear called slave with no loco pilot. This also reduces coupler forces and leads to safer operation. Further in steep up gradient sections no banker loco will be required and no time will be lost for attachment and detachment of banker.

Further the locomotive software has been upgraded for better negotiability in neutral sections. The look out glass has been widened for better comfort of Loco Pilot and the entire loco body is wrapped with vinyl layer with graphic design.

These locos have been provided with composite converters which will supply electricity for light, fan and air conditioning in the coaches. So, Diesel Generator cars at ends will not be required anymore, thus, reducing smoke emission, noise and enabling attachment of more passenger coaches within the same train length. This arrangement will reduce the travelling time of Rajdhani Exp between Howrah and New Delhi by 90 minutes.

These are noise free, pollution free & environment friendly Green locomotives which are more energy efficient and requires less maintenance and will also save lots of loco shunting time. These locomotives shall be utilized to haul the prestigious & premium express passenger trains over Indian Railways.