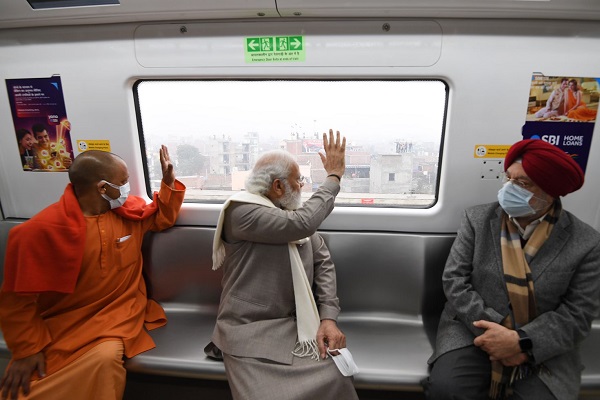 The Prime Minister congratulated the people of Kanpur for the metro connectivity and for the inauguration of the pipeline project. Recalling his long association with the city, he started his speech with many local references and a light-hearted comment on the carefree and fun-loving nature of the people of Kanpur. He also mentioned the city’s role in shaping the stalwarts like Deen Dayal Upadhyaya, Atal Bihari Vajpayee and Sundar Singh Bhandari. He also noted today’s day i.e Tuesday and invoked the blessings of Panki Wale Hanuman ji for another golden chapter being added in the development of Uttar Pradesh. “The double engine government of Uttar Pradesh today is trying to make up for the loss of time in the past. We are working at double speed”, he said.

The Prime Minister noted the change of the image for the state of Uttar Pradesh. A state, he said, that was known for illegal arms is now the hub of the Defence Corridor, contributing to the safety and security of the country. Commenting on the work culture of adhering to deadlines, the Prime Minister said that double engine governments work day and night to complete the work for which the foundation stones have been laid. “Our government laid the foundation stone of Kanpur Metro, our government is also dedicating it. Our government laid the foundation stone of Purvanchal Expressway, our own government completed its work”, Modi clarified. He listed major achievements like upcoming largest international airport in Uttar Pradesh, longest expressway of the country is also getting built in the state and Dedicated Freight Corridor hub coming up in Uttar Pradesh.

It was a proud moment for the people of Kanpur as with the advent of metro services in the city they will be relieved from the daily traffic snarls and pollution. Being an industrial city with a population of over 45 lakhs, the demographics of Kanpur have been evolving rapidly and commencement of Metro services is surely going to decongest the crowded areas. The metro will provide connectivity to residential areas and prominent institutions and will become the lifeline of the city in the long run.

Earlier in this month, three days inspection of 9-km priorty section including depot facilities were conducted by Janak Kumar Garg, Commissioner of Metro Rail Safety (CMRS) and his team from December 20-22. The CMRS team conducted thorough inspection of signalling, PA systems, CCTVs, viaduct, track and other basic facilities was conducted. The speed tests of the metro were also conducted to check the functionality and operational feasibility of the internal systems. After his satisfacion, CMRS issued safety clearance and no objection certificate to commence commercial services of Metro train for public.

The government is committed to bring the much needed change in Uttar Pradesh. It has already inaugurated many infrastructure projects in the state and the onset of metro services in Kanpur has been one of them in the league. Today Uttar Pradesh is amongst the fastest developing states in India having maximum number of operational metros. Metro is becoming the lifeline of cities in the country. In the past few years, the government has extended this network to several cities and even more cities will be connected in the time to come.

Continuing his words, the Prime Minister said, “It is one of the big achievements of our government as we have been able to deliver the projects within the stipulated time line. The government has been able to commence the commercial operations of Kanpur in just 2 Years 2 Months which is a milestone in itself”. “While I was travelling in a metro from IIT to Gita Nagar, I felt enthusiastic and elated with the growth and development of the city”. “Today, Uttar Pradesh has emerged as the economic engine of India. It is the only state in India with 5 operational metro projects”.

Concluding his words he said “The lives of people in Kanpur will surely become comfortable and they will be relived from the traffic congestion. The inauguration of 9 KM priority corridor is a small step towards making the lives of people better.”

Prime Minister flagged off the revenue operations of Kanpur Metro by showing green flag and pressing the inaugural button.

Hardeep Singh Puri, Union Minister of Housing and Urban Affairs said, “This double engine government is fulfilling its commitment of providing a world class mode of transport to the people. We stand by our resolution of providing a comfortable and smart mode of transport to the people and Kanpur Metro in this line is just a one step – we have taken in this direction.” In the coming days Gorakhpur, Meerut, Agra, Prayagraj, and Varanasi will also witness the upsurge of similar infrastructural development. The cities will soon be blessed with a world class mobility system.”

Keshav Prasad Maurya, Deputy Chief Minister of Uttar Pradesh said “The government of Uttar Pradesh is turning the dreams of the people into a reality. The commencement of Kanpur Metro will create more job and business opportunities in the city. It will definitely transform the lives of people”.

Expressing happiness over the commencement of revenue operations in Kanpur,  Kumar Keshav, Managing Director, UPMRC, said, “The city’s much coveted dream has been materialised into a reality. We are thankful to the people of Kanpur who during these 26 months showed immense patience and extended cooperation in the successful commencement of revenue operations. The credit goes to the hardworking and dedicated team of UPMRC which has left no stone unturned in achieving this feat within the stipulated time frame inspite of the COVID crisis.”

He further said, “Carrying the legacy of providing world class metro services to the people, I am sure that our UPMRC team is going to achieve similar feat for the upcoming metro projects in the state. Remaining corridors of Kanpur Metro, Agra Metro and proposed Gorakhpur Metro Rail Lite are some of the projects under the auspices of UPMRC which will surely be completed as per the set timelines. It is our sheer commitment to provide the safest, most convenient and a reliable mode of public transport for the people of Kanpur while taking their travel experience to a world class level.”