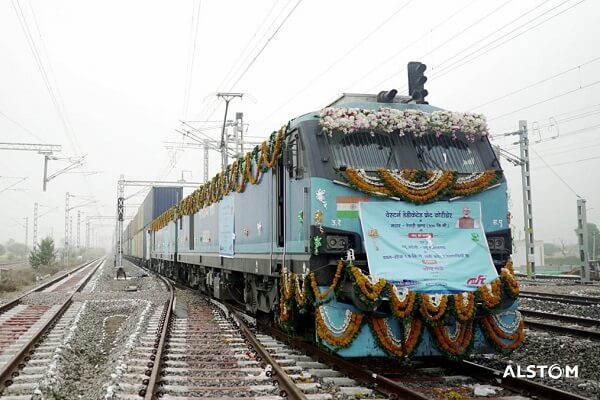 New Delhi, India (Urban Transport News): Prime Minister Narendra Modi on 7th January 2021 flagged off the Rewari - Madar section of the Western Dedicated Freight Corridor (WDFC) which is being considered as the game-changer in the economic development of the country.

The Track Recording Car of RDSO had conducted Oscillation trials of BOXNS Wagons at 110 Kmph. These wagons have a Tare weight of 19.85 tonnes and a carrying capacity of 80.15 tonnes. These wagons have a 14% more weight carrying capacity than the wagons being currently used on Indian Railways. The DFCCIL infrastructure is well placed to utilise the carrying capacity of these wagons. Currently, Indian Railways freight trains can carry 61 -71 ton weight per freight carriage at an approximate speed of 60 kmph. The newer, advanced wagons can carry weights up to 81 tonnes per wagon at an approximate speed of 100 kmph. The newer wagons are safer and modern too.

Trial runs of BLCS-A and BLCS-B wagon prototypes have also been completed in this section. These wagons have an enhanced axle load of 25 tonnes and been designed for DFCCIL by RDSO’s wagon department. The design will maximize capacity utilization and uniform distribution and point loading. These wagons on a long-haul double-stack container train on the WDFC at a speed of 100 kmph.

Dedicated Freight Corridor Corporation of India Limited (DFCCIL) will run freight train at the maximum speed of 100 km/per hour as against the current maximum speed of 75 kmph on Indian Railway tracks whereas the average speed of freight trains will also be increased from existing speed of 26 kmph on Indian Railways lines to 70 kmph on Dedicated Freight Corridors (DFC).

DFCCIL is constructing the Western DFC (1506 Route km) and Eastern DFC (1875 route km including Sonnagar-Dankuni PPP Section). The EDFC starting from Sahnewal near Ludhiana (Punjab) will pass through the states of Punjab, Haryana, Uttar Pradesh, Bihar and Jharkhand to terminate at Dankuni in West Bengal. The Western Corridor connecting Dadri in Uttar Pradesh to Jawaharlal Nehru Port (JNPT) in Mumbai will traverse through the states of UP, Haryana, Rajasthan, Gujarat and Maharashtra of WDFC.