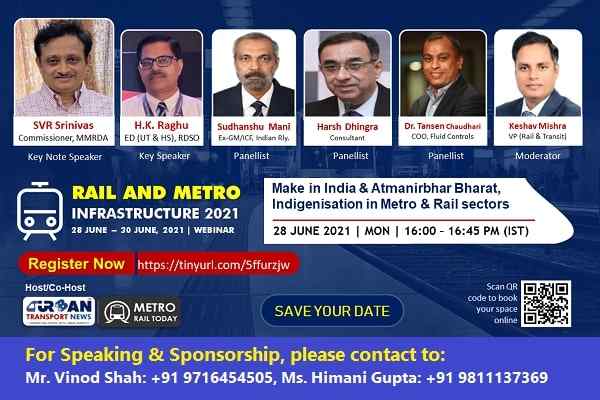 The Ministry of Railways, Government of India has taken various initiatives such as setting up locomotive factories, network expansion, station re-development and induction of railway wagons in order to attract private investment and participation. It has planned private participation in the operation of passenger trains by introducing around 150 modern rakes.

Under the 'Make in India' initiative, most of the track maintenance machines supplied during the last five years were manufactured in India by leading manufactures in the world.

The National High-Speed Rail Corporation Limited (NHSRCL) has launched the high-speed train corridor project between Ahmedabad and Mumbai. The project, commonly referred to as the ‘Bullet Train’ project, is being implemented with technical and financial assistance from Japan. The high-speed railway line covers a distance of 508.2 km in approximately two hours with an operating speed of around 320 kmph. It is expected to become operational by 2023. Of the total project cost, 81% is in the form of a loan from Japan International Corporation Agency (JICA).

The Delhi Metro’s strides in indigenization have provided amazing results, with 90 percent of DMRC coaches being made in India. When the first train of DMRC was launched, the country imported coaches from Germany and South Korea. Stipulation in contracts where less than 25 percent of the rolling stock can be manufactured outside of the country has led to foreign infrastructure companies like Bombardier (Germany) and Alstom (France) to set up manufacturing units in India. Due to standardisation, these coaches can be used as rolling stock in metros across the country. Now, these made in India coaches are also exported to the metro systems of Sydney and Queensland in Australia.

The government-owned Bharat Earth Movers Limited (BEML) which earned a Rs 3,015 crore contract to manufacture rakes for Mumbai Metro, will begin supplying its completely indigenised coaches by the end of 2020, manufactured in its Bengaluru factory. In addition to these, the Indian railways itself through its Integral Coach Factory (ICF Chennai) and Modern Coach Factory (MCF Rae Bareilly) have begun producing metro railway coaches, since there is an expected countrywide demand for 2,000 metro trains between 2015 -2000. The coaches produced by the railways are significantly cheaper by INR 3-4 crore than foreign-manufactured coaches. Thus, indigenisation through contract stipulation, knowledge sharing and technology transfers have resulted in creating an industry of metro coach manufacturing that benefits the burgeoning metro railway sector in India.

Certain Railway stations have been identified to be developed as per international standards with modern facilities and passenger amenities on the lines of newly developed airports, using PPP model. The approval of redevelopment of Gwalior, Nagpur, Sabarmati and Amritsar Railway Stations through Public-Private Partnership has been granted by the Private Partnership Appraisal Committee.

A team of experts from the Railway and Metro sector are joining together at Rail & Metro Infrastructure 2021-Webinar Series to discuss the impact of "Make in India", "Atmanirbhar Bharat" and "Indigenisation Policy" of the Government of India to make the country self-reliant in Railway sectors.

The panel is comprising of-

Register online to book your space. Limited passes are available!