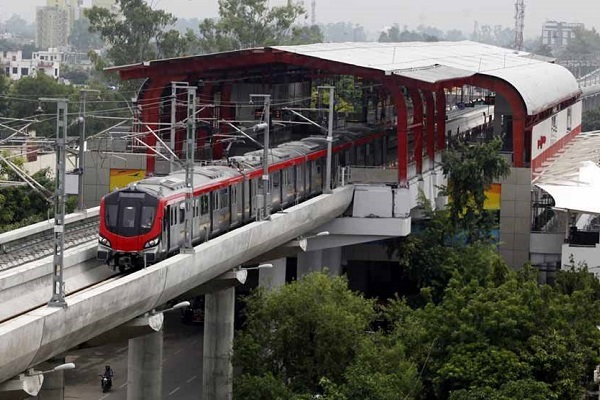 Lucknow: Shri Yogi Adityanath, Hon’ble Chief Minister, Uttar Pradesh today inaugurated an exhibition on the occasion of ‘Lucknow Metro Diwas’, 2018 at the Transport Nagar Metro Depot to commemorate the completion of one year of Metro operations. He also unveiled Lucknow Metro ‘Mascot’ and the Lucknow Metro ‘Mobile App’ on the occasion and lauded the efforts of Shri Kumar Keshav, Managing Director and Lucknow Metro Rail Corporation (LMRC) for providing an excellent and quality public transport to the people of Lucknow.

The Chief Minister aspired that such a quality public transport should be made available for other cities in Uttar Pradesh for the comfort of public. Shri Suresh Khanna, Hon’ble Parliamentary Affairs Minister, Urban Development, Government of Uttar Pradesh also emphasized the need for developing and starting Metro in other cities of Uttar Pradesh on the occasion. According to him, Metro is perceived to be an engine of infrastructural and economic development of the city/town wherever it comes up.

Shri Durga Shankar Mishra, Chairman/LMRC and Secretary, Ministry of Urban and Housing Affairs (MoUHA), Government of India also commended the stupendous efforts of LMRC for implementing Metro in Lucknow in such a short span of just three years and for being awarded with many international and national awards for its achievement in . He said that the Government of India (GoI) is committed to implement Metro in other cities throughout the Country and the coming time will see building and commissioning of more ‘Metro’ with a much faster pace.

The occasion turned out to be memorable for LMRC as the Hon’ble Chief Minister, Uttar Pradesh unveiled Lucknow Metro’s ‘Mascot’ in the newly built auditorium at the Transport Nagar Metro Depot. He also inaugurated ‘Lucknow Metro App’ for the online convenience of the Metro passengers who will now find it easy locating Metro station, calculating fare, getting the train timings by clicking the link.

The Hon’ble Chief Minister also gave away MD’s Gold Medal award to LMRC employees namely Mr. Arjun Shrivastava, Assistant Manager (Civil) and Ms. Neetu Gupta, Station Controller/Train Operator for displaying outstanding performance in the Projects and Operations department during the year 2017 – 2018. He also awarded MD’s Silver Medal award to Mr. Gaurav Sharma, Junior Engineer (Rolling Stock) and Mr. Amit Kumar, Junior Engineer (Electrical) for showing exemplary performance in the rolling stock and electrical work for the company during the year 2017 – 2018. The Charbagh Metro Station was adjudged the ‘Best Kept Station’ by the Hon’ble Chief Minister on the occasion for its overall performance throughout the last year of Metro operations.