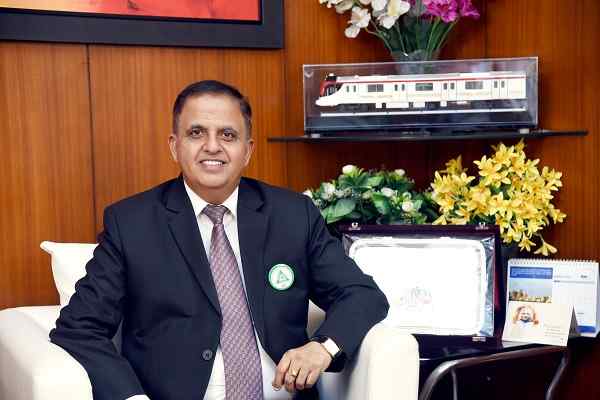 Lucknow, India (Urban Transport News): Kumar Keshav, also known as Metroman of the Uttar Pradesh relinquished his charge today after 8 years of eventful tenure as the Managing Director of Uttar Pradesh Metro Rail Corporation Ltd. Keshav handed over his safety helmet to a Maintainer, one of the junior most post of UPMRC.

Kumar Keshav is an Indian Railway Service of Engineers (IRSE) officer and a gold medallist engineer from IIT-Kanpur (M. Tech.) and IIT-Roorkee (B.E.), under his astute leadership, Uttar Pradesh metro has achieved the distinction in the execution of Metro project. Lucknow Metro project and Kanpur Metro project are the fastest-ever executed metro projects in the country so far. The operations of Lucknow Metro commenced on entire North-South corridor in just four and half years while Kanpur Metro commenced in just two years and one-and-a-half months. Both the projects were inaugurated and flagged off by Honourable Prime Minister, Shri Narendra Modi. No other Metro Rail Project has ever been able to achieve this feat in such a compressed deadline. It was an uphill task which has been made possible only by a competent and dedicated team of UPMRC under the guidance and supervision of Managing Director.

Lucknow and Kanpur Metro projects not only gave International fame to the cities of Uttar Pradesh but also changed the face of Urban Mobility of the state. Under the fine leadership of Shri Kumar Keshav, UPMRCL has been bestowed with various national and International awards in the field of project execution and operations. Lucknow’s CCS Airport Metro Station bagged the Limca Book of Records for fastest constructed underground metro station in India.

Talking about his journey, Kumar Keshav Said, “I joined Uttar Pradesh Metro Rail Corporation (then LMRC) as the Managing Director in August 2014 and that indeed was a big responsibility on my shoulders. It was since that day that I have only lived and worked for UPMRC. It wasn’t just a job responsibility for me, it was a part of me that will always stay with me. Today, I am extremely proud of what we have achieved together. After completing the Lucknow Metro project 36 days ahead from the stipulated time period, UPMRC commenced the operations of Kanpur Metro just in two years and one-month despite of two severe waves of Covid-19."

Past eight years of his life in UPMRC have remained fully devoted to implementation of Metro Projects in Lucknow, Kanpur and Agra. He stated that “Support, cooperation and guidance that UPMRC received from Government of Uttar Pradesh and Ministry of Housing & Urban Affairs, GoI has enabled implementation of these prestigious projects in a very strict timeline by the team of officials and engineers of UPMRC and contractors. I leave as a contented person who has been able to do service to my city and my State in delivering these projects.”

According to him, “There’s no shortcut to success. Hard work and dedication is the key. Stay consistent, stay true to yourself and let integrity guide you in your professional and personal endeavours. We have miles to go before we rest.”

In 2020, he was felicitated with "Inframan of the Year" Award at Rail, Infra and Mobility Business Awards 2020 for his dedicated hardwork, unprecedented leadership and extra-ordinary contributions to the Rail & Metro Industry.