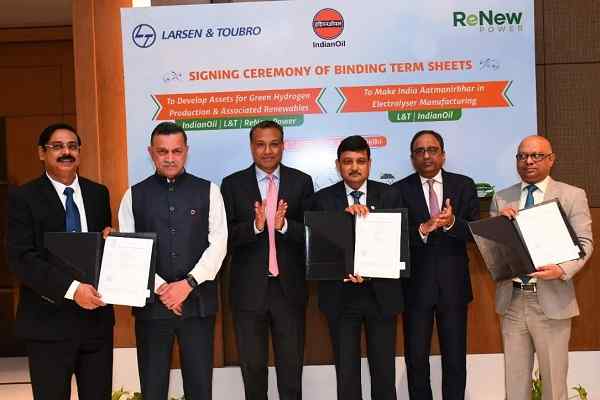 The tripartite venture is a synergistic alliance that brings together the strong credentials of L&T in designing, executing, and delivering EPC projects, IndianOil's established expertise in petroleum refining along with its presence across the energy spectrum, and the expertise of ReNew in offering and developing utility-scale renewable energy solutions.

Additionally, IOCL and L&T have signed a binding term sheet to form a JV with equity participation to manufacture and sell Electrolyzers used in the production of Green Hydrogen.

Speaking about the joint venture, SN Subrahmanyan, CEO & MD, L&T, said, “India plans to rapidly march ahead in its decarbonization efforts and production of Green Hydrogen is key in this endeavour. The IndianOil-L&T-ReNew JV will focus on developing Green Hydrogen projects in a time-bound manner to supply Green Hydrogen at an industrial scale. While L&T will bring its strong EPC credentials to the table, IOC being India’s premier oil refiner with extensive capabilities in chemical processes and refining has established deep R&D capabilities in many aspects of green hydrogen value chain, and ReNew Power has in a short time established itself as a leading renewable energy supplier and has built itself a very strong reputation. We consider this partnership as a significant step in India’s quest for alternative energy."

"Addressing another gap in the Green Hydrogen manufacturing chain, IOCL-L&T JV will focus on production and sale of Electrolyzer. Both these JVs aim to enable the nation’s ‘Aatmanirbhar Bharat’ mission to rapidly build, expand and bring in economies of scale to make green hydrogen a cost-effective energy carrier and a chemical feedstock for many sectors,” he added.

“Being the Energy of India, we are committed to powering India's drive towards carbon neutrality by leveraging the power of green hydrogen. IndianOil is forging this alliance to realise India's green hydrogen aspirations, which is in sync with the Hon’ble Prime Minister’s vision of making India a Green Hydrogen generation and export hub. To start with, this partnership will focus on green hydrogen projects at our Mathura and Panipat refineries. Alongside, other green hydrogen projects in India will also be evaluated. While the usage of hydrogen in the mobility sector will take its due time, however the refineries will be the pivot around which India’s green hydrogen revolution will materialize in a substantial way,” commented Shrikant Madhav Vaidya, Chairman, IOCL. “The partnership forged today will thus catalyse the greening of India's energy basket,” he said.

Sumant Sinha, Chairman and CEO of ReNew Power said, “In alignment with the government’s broader strategic climate goals for 2030 and 2070 set by honourable Prime Minister Narendra Modi, ReNew looks forward to working with L&T and IndianOil to build the green hydrogen business in India. ReNew, as a leader in intelligent energy solutions and with advanced capability across renewable energy technologies, is well poised to complement the capabilities of our partners. “The timing for these proposed JVs is excellent as they will help support Government of India’s recently announced green hydrogen policy to boost India Inc.’s decarbonization journey.”

The planned JVs aim to enable India’s transition from a grey hydrogen economy to a greener economy that increasingly manufactures hydrogen via electrolysis powered by renewable energy.

The central government in February notified the Green Hydrogen policy aimed at boosting production of green hydrogen and green ammonia to help the nation become a global hub for the environmentally friendly version of the element.

For countries like India, with its ever-increasing oil and gas import bill, green hydrogen can also help provide crucial energy security by reducing the overall dependence on imported fossil fuels.

While nearly all hydrogen produced in India today is grey, it is estimated that demand for Hydrogen will be 12 MMT by 2030 and around 40% of the element produced in the country (around 5 MMT) will be green, as per the draft National Hydrogen Mission guidelines.

By 2050, nearly 80% of India’s hydrogen is projected to be ‘green’ – produced by renewable electricity and electrolysis. Green hydrogen may become the most competitive route for hydrogen production by around 2030. This may be driven by potential cost declines in key production technologies and in clean energy technologies such as solar PV and wind turbines.

Today, hydrogen is mainly used in the refining, steel and fertilizer sectors, which will be the focus of the JVs’ initial efforts. The country’s refining sector consumes approx. 2 MMT of grey hydrogen every year, with IndianOil owning one of the largest shares of its refining output.

To help decarbonize Indian industry, the new green hydrogen policy provides for the waiver of Inter-State transmission charges for a period of 25 years and a banking provision of up to 30 days, which will help reduce the cost of green hydrogen significantly. This will, therefore, push the replacement of grey hydrogen with green. The Ministry of Power (MoP) has also provided a single -window-clearance portal for all clearances and open access on priority to green hydrogen projects.