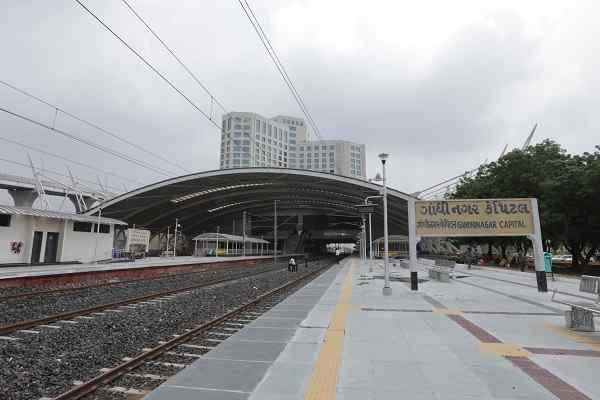 Redevelopment of the Gandhinagar Capital Railway station will act as a city booster and create an investment cycle, job opportunities and in general uplift the economy of Gandhinagar, which is the capital of the state of Gujarat.

The station is future-ready, and the concourse will be used for departing passengers when the passenger numbers increase at the station. However, in the near future, it is planned to open retail, food and entertainment outlets in this area to serve the demands of the passengers as well as the local population. Market players such as Big Bazaar and Shopper’s Stop have also shown interest in opening their mini outlets making it convenient for the passengers and local population to shop at the station. The redeveloped station will function like a “City Centre Rail Mall” where travel will be one of the several functions that it will serve.

The station offers an accessible environment for the divyangjan and has lifts and ramps at all locations. Other facilities like tactile flooring are also provided. The station is equipped with modern facilities like ample waiting spaces, through the columnless roof to provide protection against sun/rain etc, air-conditioned multipurpose waiting hall, a baby feeding room, improved signages and modern toilets, interfaith prayer room for the common man. Other amenities like the art gallery, theme facade lighting, etc will provide additional attractions which will not only enhance passenger satisfaction but will also prove to be a matter of pride for all as this station can boast of many firsts in the country. Without the concourse, the redeveloped station has been designed to handle 1,500 passengers in peak hour. With the concourse, the capacity will go up to 2,200 passengers in the peak hour.

The station aims to conserve the naturally built environment, through the use of sustainable materials like Portland Pozzolana Cement, fly ash bricks etc. and reducing the water, electricity requirements through energy-efficient designs, rainwater harvesting and recycling of water.

Taken upon the ‘Engineering, Procurement & Construction (EPC)’ model, Gandhinagar Railway Station is the Indian Railway's first station to have adopted this model for redevelopment. A one of its kind unique, column-free sleek and economical space frame of 99-meter (105 m curvilinear) span over the platform   (longest such span in Indian Railways comprising of 120 Kg/Sqm steel only) with weatherproof seamless aluminum sheeting is provided at the redeveloped station. Providing subways, large foundations to support the tall building and launching the through roof trusses were unique engineering challenges that were addressed successfully during the execution of the work. In fact, learnings from this project are going to help in the execution of such complicated projects in crowded areas of cities and the impact of this project will be far and wide.

Daily changeable theme-based lighting with 32 themes is one of the key highlights of the Gandhinagar station which is the first-ever on Indian Railways. The concept behind the themed lighting as planned for Gandhinagar Railway Station is to use the redeveloped station as a big canvas. The LED lights are designed to change the hues every day to add “colour to concrete” & bring life to the building after sunset. The dancing lights shall be used to make the place a destination for the common man. When the facade lighting on the station will interact with the DandiKuteer situated opposite the railway station, with one of the tallest buildings in the Ahmedabad/Gandhinagar area at 77m in the backdrop, it will be a sight to behold.

The people of Gandhinagar, and tourists who visit DandiKuteer, will be able to enjoy the outdoor ambiance from the green belt created in the circulating area of the redeveloped station.