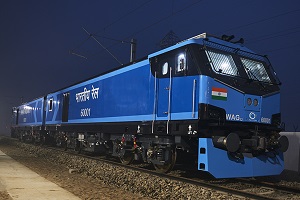 “Alstom is pleased to start delivery of the electric locomotives to Indian Railways. Commencement of induction into the IR fleet testifies our commitment towards the country. This is a revolutionary product that will be faster, safer, and eco-friendly. Also, it is scripting a new chapter for India’s sustainable mobility journey and we are happy to be partnering in this.” said Alain SPOHR, Managing Director, Alstom India & South Asia.

The new electric locomotive has been manufactured and assembled at Electric Locomotive Factory, Madhepura by Alstom as part of a Rs 25,000 crore (US$ 3.5 Euros) ‘Make in India’ deal with Govt. of India.

The electric locomotive project is a joint venture between Alstom SA with Indian Railways and involves the manufacturing of 800 fully electric “super-powered” 12,000 HP  locomotives to run on Indian Railways' tracks at 120 km per hour.

The manufacturing of the first Locomotive was commenced on 11 October 2017 and after successful trial tests by the Eastern division of Indian Railways, it has been included in the fleet of Indian Railways in March this year. These locomotives will be used to power trains on the Dedicated Freight Corridors (DFCs) of Indian Railways.

Alstom has delivered a prototype locomotive in March 2018. Based on the test results, the company has redesigned the complete locomotive including bogies. The new design of the locomotive was inspected by RDSO at the Madhepura factory and cleared for dispatch from the factory.

As part of the project, the Electric Locomotive factory along with the township has been set up in Madhepura, Bihar with the capacity to manufacture 120 locomotives per year. The project is expected to create more than 10,000 direct and indirect jobs in India.