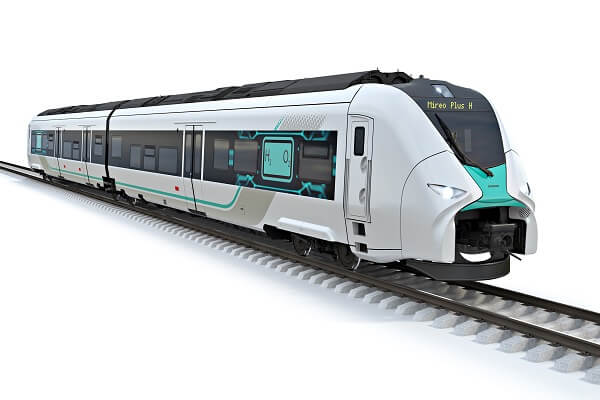 Berlin, Germany (Urban Transport News): Deutsche Bahn (DB) and Siemens Mobility are driving forward the climate-friendly transition in transport and are testing the use of hydrogen for rail for the first time.

The aim is to test a completely new overall system consisting of a newly developed train and a newly designed filling station. DB will refit one of its maintenance shops for servicing the hydrogen-powered train.

Both companies will test a climate-friendly complete system consisting of the train and its specially developed infrastructure.

The system consisting of trains and infrastructure is intended to replace dieselpowered trainsets operating on regional routes and further reduce CO2 emissions. A one-year test of the train in the region around the city of Tübingen is planned. The state government of Baden-Württemberg is providing support for the project, and the Federal Ministry for Transport and Digital Infrastructure (BMVI) has announced its intention to fund the project.

The prototype that Siemens Mobility will build is based on the Mireo Plus regional train. The two-car train set will be equipped with a newly developed hydrogen drive. The designated Mireo Plus H will be as powerful as its electric counterpart and have an operating range of up to 600 kilometers.

Deutsche Bahn is developing a new type of fueling station that can refuel the train in the same time as a diesel-powered train. The hydrogen will be produced on site in Tübingen using traction electricity generated from renewable sources.

DB will partially refit its maintenance shop in the city of Ulm to service the new hydrogen train. During its planned trial operation between Tübingen, Horb and Pforzheim in 2024, the train will replace a conventional diesel-powered unit running on the route. The new hydrogen drive will save around 330 tons of CO2 in one year.

DB currently operates around 1,300 diesel-powered trains in regional service, and roughly 40 percent of DB’s 33,000-kilometer rail network is not electrified. In addition to the option of further electrifying the system, the use of hydrogen-powered trains offers one possibility for DB becoming climate-neutral.

Sabina Jeschke, DB Board Member for Digitalization and Technology, said:

This project proves that Deutsche Bahn is not just a mobility company, but a technology group as well. We need to bring our fossil fuel consumption down to zero. Only then can DB be climate-neutral by 2050. By that point, we won’t have a single dieselpowered train operating in our fleet.

“Siemens Mobility and Deutsche Bahn will jointly develop the next generation of a hydrogen traction system – a complete system consisting of a hydrogen-powered train and infrastructure, including a new and innovative fueling station that can quickly refuel the train in just 15 minutes. The train will have 1.7 MW of traction power providing up to 1.1 m/s² acceleration and a top speed of 160 km/h. This innovative technology will make hydrogen-powered train operations faster, more efficient and more environmentally friendly. Hydrogen drives are an advanced, emission-free form of propulsion that will help decarbonize rail transport and make a significant contribution toward achieving our climate targets.”

“It’s great that the first train employing this new and sustainable technology will be tested here in BadenWürttemberg. Especially on non-electrified routes, hydrogen fuel cell propulsion can become a climate-friendly alternative to diesel propulsion. Whether powered by overhead line electricity or hydrogen - the decisive factor is that the energy comes from renewable sources. The country likes to be a pioneer for modern, sustainable rail transport. It is an essential part of the transition in transport".

Officially, the joint funding project is called "H2goesRail". The Federal Ministry of Transport and Digital Infrastructure (BMVI) has announced funding through the National Innovation Programme Hydrogen and Fuel Cell Technology (NIP 2). NIP 2 is coordinated by the National Organisation Hydrogen and Fuel Cell Technology (NOW) GmbH and implemented by the Project Management Organisation Jülich.

With hydrogen drive systems, the reaction of hydrogen and oxygen produces electrical energy and water as a "waste product". These trains can be deployed by DB as a way to become climate-neutral and replace diesel vehicles with alternative drive systems. Green electricity is used to produce the environmentally friendly green hydrogen. DB Energie is responsible for its supply.

Siemens is developing a two-car commuter train with a state-of-the-art hydrogen drive system for one-year trial operation. It consists of a fuel cell and a lithium-ion battery. The Mireo Plus H will be as powerful as electric multiple-unit trains and have a range of 600 kilometres - depending on operating conditions such as the season or the route. A three-car version will have a range of 1000 kilometres. Low life-cycle costs due to low maintenance and repair costs and a top speed of 160 kilometres per hour are the vehicle's distinguishing features.