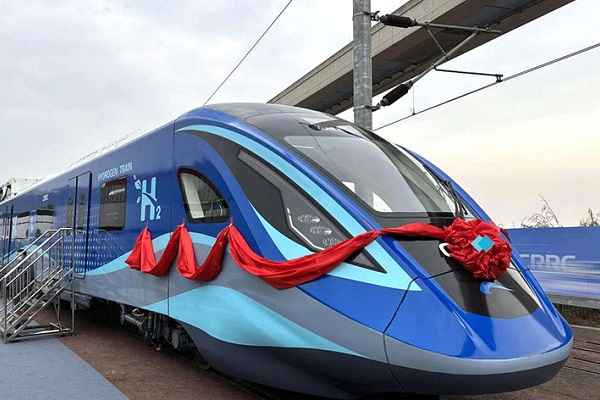 Chengdu, China (Urban Transport News): The first hydrogen-powered train in the Asian Region with its own independent intellectual property rights, developed in collaboration with the Chengdu Railway Group and CRRC Changchun, rolled off the assembly line in Chengdu, China on 28th December, 2022.

With four trains and a top speed of 160 km per hour, the hydrogen-powered train uses the key core technology from the “Fuxing” high-speed train. It also has a built-in “hydrogen-power” system that gives the vehicle’s battery life a powerful and long-lasting power source, enabling it to go 600 kilometres on a single charge.

The original catenary power supply system was replaced by a hydrogen fuel cell and supercapacitor energy supply mode for the hydrogen-powered city train. In a hydrogen fuel cell, the electrochemical reaction of hydrogen and oxygen produces energy and the reaction’s byproduct is simply water, with no emissions of nitrogen or sulphur. With the reaction mechanism remaining stable, and the noise level also being minimal.

The hydrogen train has the capacity to carry up to 1,502 passengers at a time and has intelligent driving capabilities including autonomous wake-up, start and stop, and return to the depot. In addition, it features a range of sophisticated sensors and monitoring systems, 5G large capacity train-to-ground communication for multi-network integration, and big data analysis to assess the status of the trains’ operations for increased safety.

The creation of this hydrogen train signifies a new era in environmentally friendly and low-carbon urban transportation. It will also spur the expansion and innovation of supply chains for hydrogen-related industrial products. The hydrogen-powered train can be extensively used on existing, non-electrified line segments as well, considerably expanding the range of applications for urban vehicles while avoiding the significant infrastructure investment and maintenance expenses associated with the electrification transformation initiatives.

Hydrogen energy is the key new option to support the “dual carbon” plan of China, which is clean as well as has no carbon emissions. According to the study, the hydrogen-powered train can travel 500 kilometres back and forth in a single day, which can reduce carbon dioxide emissions by more than 10,000 kilos annually.

It is pertinent to mention here that World's first Hydrogen-powered train had begin its passenger services in Germany since August 2022.