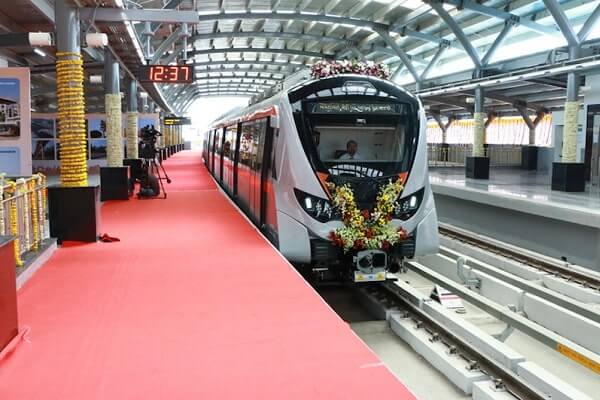 The second phase of the Ahmedabad metro includes the commissioning of two new corridors with a total length of 28.2 kilometers. It is an extension of Line 2 to the north, with 20 stops, from Motera Station to Mahatma Mandir in Gandhinagar. Construction works are expected to begin in the first quarter of 2021.

The Joint Venture comprised of Ardanuy Ingenieria and RITES will be in charge of continuing with the project related to the energy supply to the network in accordance with the work carried out in Phase I. At that stage, the route was designed with a third rail, a kind of technology that is also included on these new lines.

Work is also being carried out to extend the public transportation network in the city of Surat and its metropolitan area, the second most populated city in the state of Gujarat with more than four million inhabitants. Among the main projects to be developed is the construction of the first metro system which will have two corridors with a combined length of 40.35 kilometers. As part of these works, still in their initial phase, Ardanuy Ingenieria has been awarded the design consulting services for the power system, the 750 V DC third rail traction electrification and the SCADA system.

These two new contracts further highlight the close collaboration that exists between the Indian Transport authorities and Spanish companies specialized in railway engineering. For Ardanuy Ingenieria, this undertaking represents yet another step forward in its internationalization plans. The company’s Indian subsidiary, Ardanuy India Pvt. Ltd., already has more than 150 employees and is currently participating in the main railway and urban transport projects in the country. Among them including the commissioning of the Mumbai, Bangalore, Chennai, New Delhi and Kochi Metros.