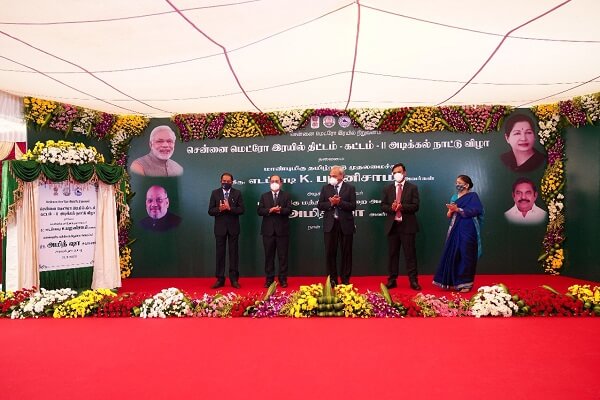 The Home Minister is also scheduled to lay the foundation for various infrastructure projects worth a whopping Rs 67,378 crore along with the launch of an elevated corridor on Coimbatore-Avinashi Road (Rs 1,620 crore), construction of a new barrage across the Cauvery at Nanjai Pugalur in Karur district (Rs 406 crore), Chennai Trade Centre extension project (Rs 309 crore), Indian Oil Corporation Terminal at Vallur in Tiruvallur district (Rs 900 crore), Lube plant at Amullaivoyal (Rs 1,400 crore) and a new berth at Kamarajar port in Chennai (Rs 900 crore) to boost cargo handling, as per an official statement.

"Hon’ble Union Home Minister laid the foundation of 109 Km network of Chennai Metro Phase-2 today. With an expected expenditure of ₹61,843 crores in the next 5 years, Chennai city will get a total metro network of 173 km by 2026, " said Durga Shankar Mishra, Secretary, Ministry of Housing & Urban Affairs.

Last year, the Tamil Nadu government cabinet had given its approval for 118.9 km long Phase 2 of the Chennai Metro Rail project with an estimated project cost of Rs 61,843 crore. However, the approval from Central Government is not yet taken.

The State Government has already applied for a loan for the execution of this project with various international financial institutions including the Japan International Cooperation Agency (JICA), the Asian Infrastructure Investment Bank (AIIB), and the Asian Development Bank (ADB), and received a positive response. The authority has already floated all major civil tenders in connection with the Phase II project.

Phase II of the Chennai Metro Rail project will cover 118.9 km with three corridors — Madhavaram to SIPCOT, Madhavaram to Sholinganallur, and Light House to Poonamallee.