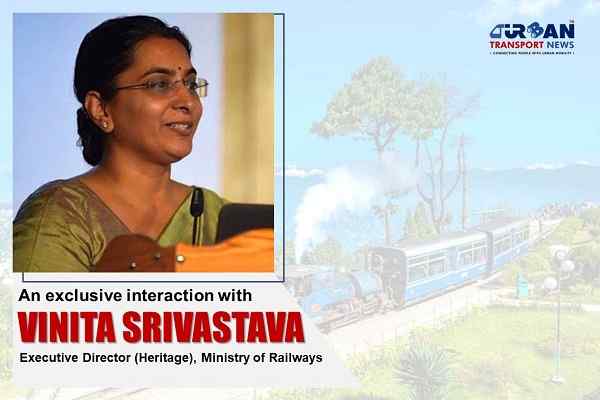 Smt. Vinita Srivastava, IRSME has served in leadership roles for over two decades in various government ministries of Railways, Steel, Culture & Heavy Industries. In a recent interaction with Urban Transport News, she frankly talked on a historical introduction to the concept of “Railways as World Heritage sites” with several theoretical and practical considerations.

Tell us about your professional journey in Railway industry.

I have had an interesting career that spans mechanical engineering, the transportation sector, and cultural preservation - an unusual mix. I’ve always had a love for the Indian railroads. You see, a railway isn’t just tracks and trains. It’s the backbone of the country, connecting and linking the carriage of people and goods to the various remote parts of our country. The Indian rail system has a rich cultural, economic, and historical significance to it. As such, it’s been a great field to work in.

I started out with a degree in mechanical engineering from the Special Class Apprentice scheme in Jamalpur, a prestigious input to the gazette cadre of Indian Railways in their Mechanical Engineering Services.  My first job was as a vendor development engineer in Rail Coach Factory, Kapurthala (Punjab) working on Indo-German transfer of technology with ALSTOM-LHB. Over time, I worked in various mechanical and operational positions for the Northern and Southern railways, and in other sectors like steel, and manufacturing.

In 2011, I earned an executive masters degree in management from IIM Ahmedabad. That gave me a chance to expand my interest and reach beyond the mechanical engineering side of things. I worked on deputation in the Ministry of Culture in the areas of heritage studies, cultural mapping, museology, and conservation architecture. In 2018, I was instrumental in developing a bilateral memorandum of understanding for cultural and conservation information for the UNESCO World Heritage Site temple complex of Angkor Wat in Cambodia.

I’m currently the Executive Director (Heritage) at the Railway Board, which combines all that I love about the railways and culture of India.

What is the meaning of heritage in the railway context? Please highlight some heritage railway stations in India.

Indian Railways has more than 160 years of rich history and a wide spectrum of both tangible and intangible heritage. It’s the proud owner of four UNESCO accorded World Heritage Sites namely Darjeeling Himalayan Railway (1999), Nilgiri Mountain Railway (2005), Kalka Shimla Railway (2008) and Chhatrapati Shivaji Terminus, Mumbai (2004). There are two more in waiting or on the tentative list namely Matheran Light Railway and Kangra Valley Railway. So for me, it’s an interesting cusp to be at right now professionally – railway technology and industrial heritage! Today, Indian Railways maintains 34 museums, heritage parks and heritage galleries, spread all over India, designed to preserve the railway heritage of India. The National Rail Museum in New Delhi and regional rail museums at Chennai, Mysore, Howrah and Nagpur are iconic tourist destinations in their regions.

Heritage comes from the Hindi word “Dharohar” a conjoint expression of “Dhara” and “Ohar”. The intent is to preserve and reclaim what is of value, a sort of trusteeship of fond positive memories. Now with Railway Heritage, the engineering and industrial associations are vital, but not the only connect. For India, railway technology has bittersweet associations tracing memories to colonial rule, the independence struggle, partition & then the journey from Heritage to Modernity. We must emphasize the dynamism of this transport mode, and its pivotal role in propelling the nation forward in history and in the future. Perhaps a deeper look at the story of significant railway stations like CSTM (erstwhile Mumbai VT ) and the newest, Rani Kamlapati (erstwhile Habibganj, near Bhopal) best demonstrate the trajectory of our  railway’s heritage – from old to new.

What are the linkages of heritage with railway infrastructure?

To answer this, I have to explore the academics of Heritage studies – Built Heritage & Intangible Heritage. The term “Infrastructure” is not limited to the built structure itself but extends to the stories connected to it, which lives on for generations. Let me explain with an example.

Some say that the story of America is of its road network – which expanded in post-war times and helped connect and combine its aspirations & culture. I believe that for the nation-state of India, its story can be told beautifully by its railways! So the “Railway Infrastructure” (the built) and “Railway Heritage” of railway investment and development, which mirror the economic growth and aspirations of a country on the move (the intangible), tell a powerful story when woven together in a narrative.

It is up to us to remember and retell these stories, in a way that reinforces the Indian Railways’ Heritage as an undeniably powerful and service-oriented force-multiplier, which is pivotal to the nation’s aspirations and its economic growth.

What is the purpose for preserving railway heritage sites?

Why does one preserve the past? There are many reasons – to remember, to draw inspiration, to avoid repeat mistakes, and to strengthen identity. Purpose is what drives us to achieve what may seem impossible at first.

Railways in India began as a colonial expression of supremacy over a subcontinent. The fact that British Railway mail parcels could navigate from Punjab to Burma within days made their regime seem omnipresent, communicated and coherent. And when students of history ask “How could so few rule so many?” in pre- independence India, it is the railways, shipping, gunpowder and other products of the industrial revolution that are part of the answer.

An independent India embraced the railways and put it to good use in various ways. Railway bridges span mighty rivers, its public sectors employ thousands, and the recent pandemic demonstrated its response through services like the oxygen express and kisan and shramik specials.

Preserving railway heritage sites and intangible stories helps us remember the importance of “Being connected and moving forward” – maybe that’s the “purpose” captured in a tiny phrase!

As for the purpose of preserving assets, some examples of tangible assets in this case are steam locomotives, meter gauge rolling stock, wooden body coaches, wagons, equipment, and artifacts that are no longer in operation now. With their phasing out, lots of maintenance practices have also been gradually forgotten. At times, it becomes impossible to locate an artisan who can do the valve setting of a steam locomotive or a carpenter who can precisely fix the door of a wooden body saloon. Preserving those helps us trace the history of technology more than a hundred years old.

That’s when we start dealing with the intangible assets – the heritage of the skills and techniques and the popular memory transmitted from generation to generation, providing people with a sense of identity. This is why the Indian Railways, in addition to being a transportation mode, occupy a special place within the national heritage of India.

When the tangible and intangible assets of the Indian Railways are appropriately preserved and open for public display, they create memories of the past in the hearts of the future generation and thus help maintain a continuity of human experience. It is the Railway’s prime duty to safeguard this living heritage and to transmit it intact to future generations.

There are many international railway stations that preserve and transmit national heritage in unique ways. I will describe two I have visited myself:

Anhalter Bahnhoff in Berlin, which was bombed in the war (November 1943), then redeveloped as a heritage station complex, a technology museum and heritage precinct post-war. The station itself is now a modern relocated one and some older buildings taken over by Siemens, a railway technology company. A part of the red brick old bombed structure is preserved onsite. The entire bombed area was converted to a heritage area including a massive synthetic surface football field which is another German obsession. A concert venue called the Tempodrom opened in 2001.  Indeed a heritage railway station site that tells a national story of reconstruction, industrial development and national rejuvenation.

These and other heritage railway precincts world over creatively tell the story of the old with the new. They continue to be areas that serve the modern public transportation needs of citizens in a beautiful and connected way.

Anything you want to share with our viewers. Please tell.

One of my work areas was to establish and run the National Mission on Cultural Mapping (NMCM), It was a small but significant project, with a purpose to address the necessity of preserving the threads of rich Indian art and cultural heritage, and to convert the vast and widespread cultural canvas of India into an objective cultural map while helping create a strong “cultural vibrancy” throughout the nation.  Actually when you think of Indian Railways, very often you think of crowded trains and all that goes into the huge network of rail lines and rail cars. But you don’t think much about the cultural heritage of the rail system. Can you then, see beyond the tracks and the trains, into the richness of the history and heritage of the rail systems in India?

Our ‘heritage charter’ is to preserve and make available the tangible and intangible heritage and history of the Indian railways, the industrial revolution, and the different modes of transport and their socio-cultural impact on Indian society. It is vital to realize how industrial components of a society have much more than just an economic and environmental effect on a country

[Vinita Srivastava is the Executive Director (Heritage) at Railway Board and an alum of the Chevening Research, Science and Innovation Leadership (CRISP) Programme, 2017]