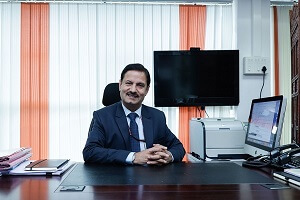 Congratulations on taking charge of the Managing Director of Kochi Metro Rail Limited. Kindly brief us about your professional journey in the industry.

Mr. Alkesh Kumar Sharma: Before joining to Kochi Metro Rail Limited as Managing Director, I had worked as Chief Executive Officer & Managing Director of the Delhi Mumbai Industrial Corridor Development Corporation Limited (DMICDC) from October 2015 to September 2019. I was also the CEO of the National Industrial Corridor Development and Implementation Trust (NICDIT). The Industrial Corridors are being developed by the Government of India as global manufacturing and investment destinations by setting up investment regions supported by the world-class infrastructure and enabling policy framework. Before that, I was working as Joint Secretary, Ministry of Road Transport and Highways, Government of India for three years, where I handled matters relating to National Highways Planning, land acquisition, forest and environment clearances, review and monitoring of National Highways Projects, coordination with Railways, Defence and other agencies and all matter related to toll and toll policy on the national highways. I was also Chairman of the Indian Highways Management Company Ltd. Apart from this, I had worked with the United Nations Development Programme (UNDP) for three years as National Project Director, Urban Development and Poverty Alleviation. In Kerala, I worked as the Managing Director of Kerala Tourism Development Corporation; Kerala State Industrial Development Corporation; Kerala Minerals and Metals Limited; Malabar Cement Limited and Kerala State Electronics Development Corporation. I also worked as Director, Kerala Tourism and as Secretary, Industries and Investment Promotion in Government of Kerala. I was Director in the Board of BPCL, Apollo Tyres, Nitta Gelatin India Ltd and Geojit BNP Paribas Ltd.

What technical, financial, logistic, and project management challenges did you have to deal with to make Kochi Metro one of the best urban mass rapid transit systems in the country?

Mr. Alkesh: Land Acquisition was a major challenge with the State government spending a large amount of money on it to increase the Right of Way along the viaduct. A majority of the workforce came from other States and their logistics had to be managed. Traffic congestion during the construction had to be managed with efficiency and people's support. besides, alignments through major road junctions and Railway crossings posed challenges that were managed systematically.

When will the Petta Metro station of Phase I be opened for the public? What is the latest civil work progress in the Kochi Metro Phase II?

Mr. Alkesh: We are planning to open it by March 2020. Work is progressing fast and we hope we can finish much earlier than the deadline. We have started the road widening at the seaport airport road as part of the preparatory work for the phase-II of Kochi Metro.

What are the salient features of the Kochi Water Metro? Please tell us about its design and construction features and current progress in the project.

Mr. Alkesh: Kochi often referred to as the commercial capital of Kerala, is one of the most densely populated districts in the state of Kerala. The present estimated population of Kochi is about 20.01 Lakhs (Census 2011 for Greater Cochin Development). Inland water transport was once the primary means of freight and passenger transport on the Vembanadu lake.

The system has been declining over the last few decades and has seen minimal investment and technology upgrades. Water transport is inherently more energy efﬁcient than either rail or road transport. The project is expected to reduce pollution and traffic congestions in the city and also ease access to business areas on the mainland for urban households situated along the Kochi lakeshore. The Kochi Water Metro project envisages the development of 15 identified routes, connecting 10 islands along with a network of routes that span 78 km with a fleet of 78 fast, electrically propelled hybrid ferries plying to 38 jetties. More than 1,00,000 islanders are expected to benefit from the water metro. It is envisaged to be a socially inclusive transport system than being just a transport service with a focus on improved livelihoods through commercial property development and tourism-based initiatives. The Kochi Water Metro Project intends to introduce modern, energy-efficient, environment-friendly and safe boats with low wake and draft characteristics at a high frequency to increase ridership. The project is estimated to cost Rs 747.28 crores with core water transport infrastructure estimated at Rs 435.37 crores. External funding for the project is being provided the German Funding Agency KfW to the tune of Rs 579 Crores. The balance Rs 102 Crores is being funded by the Government of Kerala. In order to encourage private sector participation in the project and reduce the burden on the government, private sector participants under a suitable business model were proposed. The funding to be provided by the private sector is thus estimated at Rs 66 crores. Thus the total capital outflow excluding private participation is expected to be Rs 681 crores. The majority of the navigation channel identified already belongs to the National Waterways and Cochin port area. Hence seven additional Terminal locations have been proposed based on the public consultation with various stakeholders in the area. Ground Breaking Ceremony of the First Water Metro Terminal station at Vytilla on obtaining the recommendation for the project for Environmental Clearance from MOEF&CC. Water Metro is fast progressing. KMRL plans to complete as many terminals as possible in a year. Cochin Shipyard has won the tender for constructing boats. They are expected to deliver the boats by November 2020.

What are your plans to integrate Kochi Metro with other modes of public transport to provide first and last-mile connectivity to commuters?

Mr. Alkesh: KMRL has already integrated other modes of Public transport. Under the guidance of KMRL, seven bus companies were formed. KMRL also introduced e-autos and  Auto Rickshaw drivers have formed a  society, a first in the country. Cycles and auto-rickshaws are aiding to the last-mile connectivity plans. At present, there is a plan to ensure last-mile connectivity to all Metro commuters. Discussions with various stakeholders are fast progressing.

You are also heading the Cochin Smart City Mission. Please tell our readers about new development in the project.

Mr. Alkesh: Cochin Smart City Mission (CSML) has awarded tenders for 18 projects. This includes the Integrated City Command and Control Center (IC4) which will integrate the entire city services in Kochi including surveillance, security, utilities, and fire services. The largest project is the vacuum-based  Sewerage Treatment Plant at West Kochi which is expected to connect 10,000 households.

What are your views on the contents we cover in Urban Transport News publications i.e. online news portal and bi-monthly magazine?

Mr. Alkesh: I am glad that there are an exclusive magazine and news portal to deal with Urban Transport in India. There is a need to make the public aware of the importance of public transport. More focus on integrated transport solutions will help stakeholders in better planning and project management.