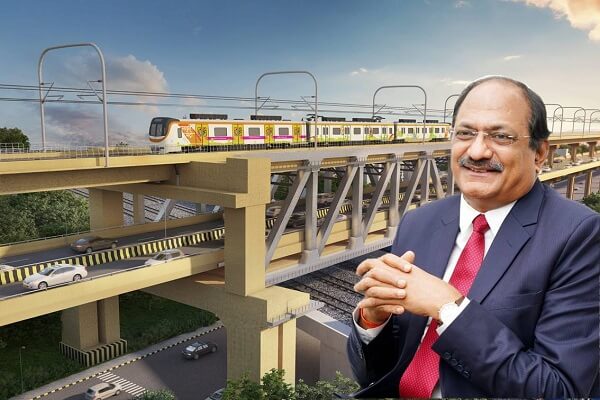 Under the strong leadership of Dr. Brijesh Dixit, Maharashtra Government is expanding mass rapid transit systems in various cities of the state apart from Mumbai. Dr. Dixit is working in the capacity of Managing Director of Maharashtra Metro Rail Corporation (Maha Metro) and having the responsibility to implement state-of-the-art rapid transit system in Nagpur, Pune and Nashik. In a recent interaction with Urban Transport News, Dr. Dixit tells how Maha Metro is setting records and creating international benchmarks for sustainable transport solutions in various cities in this pandemic times.

Congratulations on winning `Construction World Person of the Year 2020 Award’. Kindly brief us about the significance of this award for Maha Metro.

Being adjudged “Construction World Person of the Year- Public Sector 2020” is an immensely gratifying and humbling experience.

The award is a recognition to the hard work of the entire Maha-Metro team which from the very beginning has set the target of developing Metro Rail in cities of Nagpur and Pune within the cost, and in the stipulated time-frame. This is actualized with the highest quality output and in the process has created many international benchmarks. This recognition further emboldens the team to keep charging with enthusiasm to complete the two projects in a manner that we create more and more milestones and benchmarks.

What is the current progress of the Nagpur Metro Rail project and when the first phase will be made fully operational?

Nagpur Metro project is at an advanced stage of completion. Twenty-five km of the project i.e. two-third of the total project length was completed in a record 50 months period, with 1 km being constructed every two months. After stoppage of the passenger services during COVID-19 induced lock-down, operations have since recommenced on this stretch duly following all the COVID-19 safety protocol.

As regards the full first phase completion, currently the physical and financial progress of Nagpur Metro project stands at 89% and 82% respectively. The work on the balance portion of the project in Reach II (Orange Line) and Reach IV (Aqua Line) had few months setbacks due to outbreak of COVID-19 and subsequent lock-down measures announced by the government. Nonetheless, the work is now progressing at a brisk pace, and the full project is likely to get operational by the end of 2021.

Kindly tell our readers about the current progress of the Pune Metro Rail project and the deadline set to commission the priority section of the project.

Pune Metro Project consists of two corridors totalling 33.28 km route length (including five km underground section), 30 stations and two Metro Coach Maintenance Depots. The physical progress and financial progress of the project currently stands at 45% and 39% respectively. Often infrastructure projects in the country are majorly impacted with the problems related to the land acquisition, but 85% of the land required for Pune project has been acquired amicably and in record time and the balance 15% will be acquired shortly.

Pune Metro project like other infrastructure projects in the country also suffered during the lock-down period after the outbreak of COVID-19 pandemic. But once the permission to resume the work was received from government authorities, Pune Metro construction work immediately recommenced with the labour available in-situ.

Indubitably, the work was initially slowed down due to the flight of migrant labour to their native places. But with the extraordinary effort of Maha-Metro and its contractors, total labour available on the project site today has reached a larger number compared to the pre-COVID-19 days. This has given impetus to speedy execution of priority section work i.e. PCMC-Phugewadi (Line-1) and Vanaz to Garware College (Line-2). Nonetheless, due to lockdown impact, the completion of priority section will be delayed somewhat with the Line 1 priority section likely to be completed by March 2021 and that of Line 2 by June 2021.

In a leap for “Make in India’’ policy and a major push to “Atma- Nirbhar Bharat”, Maha-Metro through international competitive bidding has awarded the contract for manufacturing and supply of 102 aluminum-bodied metro coaches for the Pune Metro project to Titagarh Firema, an Italian subsidiary of Titagarh, a Kolkata based Indian company in the field of railway coaches and wagons. While the first three trains will be manufactured in Italy, balance trains will be manufactured in India. This is the first time that “new generation” “aluminum body coaches” (that are lighter, more energy-efficient and have a better aesthetic than the steel coaches) shall be manufactured in the country. It is an epoch-making game-changer in the filed of metro-rail in the country.

The most critical aspect of the freezing design of the coaches has since been completed and the car body for the first train is in the final stage of manufacturing and its outfitting and equipment assembly will start from 15th Nov 2020. Subsequently, the testing of the train shall be done, and the first train is likely to be dispatched from Italy to Pune, by the last week of April 2021.

Pune Metro trains will be 3-car train formation (DMC-TC-DMC) with a length of 67.8 km with eventual extendibility possibility to 6 car trains. The maximum design speed of these trains is 95 kmph with a maximum operational speed of 85 kmph. Maximum passenger capacity per train will be 978 (with seating 140 and 838 standee @ 8 persons per sq. km)

What is the current status of Metro-Neo projects proposed for Nashik in Maharashtra and Warangal in Telangana?

The current status of Metro projects at Nasik and Warangal are as follows:

This is an innovative Mass Rapid Transit System providing low-cost, energy-efficient and eco-friendly urban transport solution, for Tier 2/3 cities. Detailed Project Report (DPR) estimated at 2100.60 Cr, for Nasik City (33 Km, with 30 Stations) of Metro-Neo System has been approved by the Govt. of Maharashtra and the project is awaiting approval from the Govt. of India. Also, technical specifications of the Metro-Neo have been frozen based on the recommendation of a committee headed by MD Maha-Metro and the same are under approval of the Railway Board.

How is 'Maha Metro' overcoming the new challenges arisen due to the outbreak of the COVID-19 in the country? Kindly elaborate us some steps taken for the safety of site workers.

The unprecedented global pandemic COVID 19 coupled with consequent lock-down was a dampener for the infrastructure projects in the country. It also impacted both Nagpur and Pune, Metro rail projects which faced many challenges, and extraordinary efforts were required to ensure that the work is resumed duly ensuring full safety of the workforce. Some of the challenges and the measures taken to overcome them are as under:

What are the different prospects of business opportunities in the metro projects being undertaken by Maha Metro?

Maha Metro offers multiple business opportunities in the projects undertaken by it. In fact, the opportunities range from being part of the project construction to indirect employment. Some aspects are mentioned below:

What are your thoughts on Government of India's "Atma-Nirbhar Bharat" initiative and how is Maha Metro finding itself fit for this mission?

“Atma-Nirbhar Bharat’’ and its precursor “Make in India’’ policy both have significant implications for Metro Rail Projects in the country. A large number of cities in the country are now developing metro rail projects and it is the demand of the time that full indigenization is achieved in the shortest possible time.

Maha Metro has ensured overall project domestic content at more than 70%. In the civil portion, indigenization is 95% against 80% policy mandate with sole import exception being the import of Head Hardened Rail and Fasteners not manufactured in the country. This has been ensured in both Nagpur and Pune projects

Also as explained earlier in a leap for make in India policy, MAHA -Metro, through international competitive bidding awarded the contract for the supply of 102 modern aluminum-bodied metro coaches for the Pune Metro project to Titagarh Firema, an Italian subsidiary of, Titagarh, a Kolkata based Indian company in the field of railway coaches and wagons. The bulk of these coaches shall be manufactured in the MAHA -Metro Nagpur factory. This is the first time that new generation “aluminum body coaches”, (that are lighter, more energy-efficient and have a better aesthetic than steel coaches) shall be manufactured in the country. It is an epoch-making game-changer in the field of metro rail in the country.

Any other things you want to share with our readers.

It is my proud privilege to extend my warm greetings to readers, share information on Maha Metro as well as on the future of urban transport in the country. It is consensus estimate of various committees that within next one decade, i.e. by 2030 more than 600 million Indians will be staying in cities and they will be contributing to three fourth to the GDP of the country up from two-third today. If we extend the horizon year to 25 years from now, more than 60 per cent of the country’s population will be urban.

In view of the above, clean non-polluting urban transport will be the most critical requirement in years to come. This means more and more cities will need to create Metro-Rail and Metro-Neo infrastructure. By the very nature creation of such infrastructure will need a lot of money and it will not be possible to charge the market-related fare from commuters. This will necessitate that project innovation are made to reduce the construction cost, optimize the O & M cost and maximize non-farebox revenue.

It is here that the Maha-Metro has a proven track record of constructing metro rail at a cost 10% lesser than DPR cost, operating it with 25 staff per km (a new global benchmark), using cheap self-generated solar power to the maximum (65% of total energy requirement including traction) and finally having 60% of its total revenues from non-fare box revenues will be the trendsetter for future.

To cap it all innovative Metro-Neo conceptualized by Maha-Metro for Nashik will prove to be a precursor for similar cost effective and energy-efficient systems in other tiers 2/3 cities reducing the need for much costlier metro rail systems till the city population and PHPDT along key corridors make it absolutely must to graduate to Metro Rail systems.