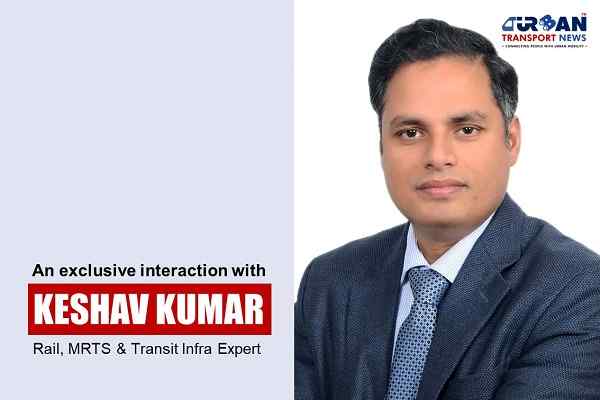 Keshav Kumar is having more than 17 years of experience in successfully managing large scale infrastructure projects. He was associated with Delhi Metro, GE Transportation, PwC, High Speed Rail and other Railway & Transit projects.

In a recent intraction with Urban Transport News, Keshav talked about his views on various policies being implemented by Indian Government to acheive its transformation goals in Rail Infrastructure sectors.

How has been your journey in the Railway and Metro sector? What do you about the future of Urban Transit system in India?

First of all, I would like thank Urban Transport News for giving an opportunity to share my journey and thought about the development of Urban Transport system in Indian cities.

I spent significant years for the development of Public transport system. Post education, I started my professional journey from Indian Railway and then joined Delhi Metro. It was a turning point for me to explore the Metro System which was started recently in Delhi.

See in India, most of the cities are highly dense, unplanned developed and lacking for a reliable transportation system Also number of road accidents are very high. The present traffic system is highly stressed  condition (due to depleted infrastructure, poor connectivity, lower average speed etc.) and unable to cater the future requirement of cities.

Its not only impacting environment but also affecting the overall economic conditions of the users. Considering all such issue, we must have a combination of sustainable and green transport solution in urban areas.

The traffic problems are increasing in the cities with increase in population. As an Urban Transit expert, what would you suggest for this problem?

With increased urbanisation and rise in population , one of the most challenging and complicated issues in city life is the traffic problem. Peak-hour traffic congestion in almost all large and growing metropolitan regions around the world is here to stay. In fact, it is almost certain to get worse during at least the next few decades, mainly because of rising vehicular movement.

At present only mega cities having certain level of transport system, so people are moving in to those cities for their livelihood. We have to change the scenario for future sustainability.  We need to develop advance level of transport systems in all types of cities which can carry large number of users. Development should in a distributed format to improve Use  of Intelligent Transportation System to manage the traffic problem. Integrated development is also a key parameter for seamless transition from one mode to other mode. Government is in the process for the development of smart cities and transport system in India cities.

RRTS will be a game changer in NCR after successful operation of Delhi Metro. As we know that majority of people have migrated or commuting  from near by locations to Delhi for their work or businesses. The common mode of commuting is either by personal vehicle or buses.

After RRTS, with reduce cost and convenience  people would definitely like to travel from the nearby location to central Delhi area and vice versa. It will not only improve the regional connectivity but also create enamors opportunities in nearby cities  in every segment.

Similar concept should be implemented in connecting cities which will becomes decongest the exiting area and also reduce the overall pollution and demand of personal vehicle.

The Railway is bringing new reforms through trains like Vande Bharat and station redevelopment plan. What do you think about it?

Users are expecting for standard services and safety in railway journey in comparison with the airlines.

Although no. of initiatives have already been taken up by the  Ministry of Railways (MoR) and zones, still Railway is really struggling on their services  and infrastructure development front.

To completely turnaround the railway infrastructure, it will be a mammoth effort and need huge investment. I have a very optimistic view on the future development, however to see a significant impact of such a type of vision, all projects should be taken into fast track with a strict timeline.

Railways should start working towards participative models, give clarity on requirements, and onboarding professionals who can support implementation of  such mega plans. There are no. of development models are successfully implemented across the world and railways should also adopt those concepts.

What changes shall be made in train operations to reduce accidents when it comes to Railways ? What are the improvements which can be made in the operations of Metro trains?

It is unfortunate that we have no. railway accidents report every year and thousands of people lost their lives in train accidents in the past. Every accident not only destroys human life but also has a significant impact on the railway  assets.

In India, more than 70 % people are using trains for interstate travel. Railway carries millions of passengers on a daily basis. We should take priority to reduce/stop any kind of accident whether due to human error or any other reason. Our trains and associated system should be completely failsafe with zero error.

See, Although Metro system is guided system similar to railway system  but If you compare  Railway operation with Metro system, only few occasions accidents happen due to technical snags, also no loss of human life had happen in any of the metro in India.

Operationally metro systems are mature but still lots of improvements can be done as per the local conditions requirement. We should focus on the journey and time vs money assessment, so that gaps can be identified and provide solutions to the commuters. It also supports operating organisations to manage their operational income and expanses.

As Make in India and Atmanirbhar Bharat initiatives gain new shapes, what do you think about these initiatives? Please share your views.

It’s a noble concept of creating ecosystem for self-sustained manufacturing capabilities. As we know, we are dependent on export items in the metro and advanced level of transport solution development.

See India is a growing economy and the entire world is looking for a market. Our local suppliers and manufacturers are capable of meeting the future requirement but the major challenge is  to compete with international suppliers on cost of the product, their life cycle and quality.

Govt. focus and initiatives are very much evident on the development as Make in India, MSME, restricting international bidding at certain value, and local content conditions. We have an enormous opportunity to develop a strong manufacturing Hub to meet the  internal requirement and also for the rest of the world.

We must promote our industry by developing them, secure demands and  create other enablers in support of it but also be ready to develop innovative and best quality products for the world.

I would like to appreciate Indian railway, who has not only developed in house manufacturing capabilities but also exporting to few customers. Similar approaches would be seen in the metro and other segments as well.

What do you think about the driverless train technology which was introduced in India through Delhi Metro? What are the pros and cons of this technology as per your opinion?

Transportation Technology is changing day by day and we are in an open world structure. We are at the very initial stage so every new technology should either be developed or brought to use  for a better transport solution. In Metro, Rolling Stock with GoA2/3 is very common but now GoA4 is also available, it gives the next level of safety in train operation and optimised services. I don’t see any problem in using driverless trains. Dubai and other cities are using such technology very successfully. Delhi Metro is also implementing driverless  technology in a stage-wise manner. You will see other metros will be also using similar technology in near future

Do you think the infrastructural development of the mass transit system is adequate in India? What do you think about the topic?

In India, urbanisation rate is very high with a growing population, the country is working hard to transform itself over the next few decades. Every city is required to develop adequate urban infrastructure for future development, in which Improving public transportation is a priority for govt.  We need every city to be equipped with a reliable and safe transport system as per local conditions. For the next 15-20 years we have to create good numbers of transit infra projects, should be a combination of possible modes. All smart cities are working in the same direction. I am hoping within 2-3 years we will have a reasonable transport infra system in Indian cities.

What are the new technological advancements coming in the field of Metro and train operations? How will these technologies transform the future of the sector?

The rapid pace of technological, environmental and demographic change is leading to some major technological innovations in the world of rail and metro. New and upcoming technologies will change the

entire transport system development and management. Metro systems around the world have many differences in their design and operation, one aspect of which is the level of automation. Like driver less operation, Asset management, fault detection and corrective actions, easy control, real time monitoring, passenger access, infotainment, etc. It will also improve the operational safety and security with reduced cost and time

As 5G is going to be rolled out in next few years, what changes do you think it will bring ? Please explain.

Today’s current communication systems are unable to provide adequate services to satisfy both passengers and rail operators 5G is offering many technological advances throughout the world in other industries in terms of cellular reliability, so why not apply these advantages to the railway systems as well?

5G will be at the heart of Future Railway Mobile Communications System (FRMCS), the successor to GSM-R allows for real-time updates on ticketing and availability, closures, delays, and much more pertinent information a traveller would seek at a moment’s notice.

On a deeper level, 5G also helps technicians, conductors, and other railway workers to have real-time monitoring of the entire train systems, including areas of wear and tear. As per industry  5G is set to revolutionise Automatic Train Operations:  5G’s higher bandwidth will also enable greater use of high-quality video for security, enhanced communications between operating personnel, improved situational awareness during emergencies, aerial inspections, and a host of other data-hungry applications.

You were a part of the webinar "Rail & Metro Infrastructure" organised by Urban Transport News and Metro Rail Today. What suggestions and messages would you like to give to our firm?

First of all, I would like to congratulate the Urban Transport News and Metro Rail Today team for their marathon effort to conduct such a detailed Webinar series on Urban transport system, emerging technology and research. Every session was very informative and knowledgeable,  I personally enjoyed it a lot.

In future you can create a subject specific webinar and conference where industry leaders can present and share their achievements and thoughts for the development in the Transport sector.