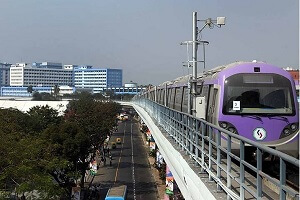 Kolkata (Urban Transport News): An attempt has been made to bring all the vessels services of Bengal under one roof. This step has been taken after getting the Cabinet's nod in the month of June. Initially, the Transport Department of West Bengal has identified the importance of Bengal by marking the 104 Jetties. With this, there are 24 more jetties, where more people are getting up-down. They will be taken under their control from December.

On Tuesday, the state's Transport Minister Shubhendu Adhikari has told to media. Inaugurating dozens of vessels in Millennium Park on Tuesday, he said that 35 state-of-the-art vessels including one Ro-Ro Vessel were inaugurated. Soon a project of World Bank is going to start, in which Rs. 3000 crore will be provided for passenger, goods vehicles and tourism.

Token system will be on the lines of Metro He said that the token system has been started on the lines of Metro service, which is currently being used as the first experiment on Millennium Park Lunch Ghat and if this experiment is successful, it has also be implemented in the whole place. On Tuesday, 35 vessels, including Ro-Ro service, were inaugurated by the Transport Department in Millennium Park.

Kannanagar residents found gifts Hooghly On the occasion of the Durga Puja for the benefit of the residents of Konnagar district, a gift of two Vessels has been given by the State Government. The gifted vessels have given named as MD Sharad and Anjali. Both the Vessels Konnagar were handed over to Panihati Water Path Transport Department. In the presence of Chief Minister Mamta Banerjee, transport minister Shubendu Adhikari handed it over to Bappaditya Chatterjee, chairman of Konnagar municipality in the presence of Uttarpara legislator Praveer Ghosal in a program organized in Kolkata.