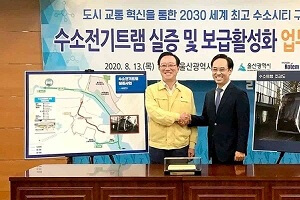 On 13th August 2020, Mayor of Ulsan city and CEO of Hyundai Motors signed this agreement.

Hyundai Rotem has already entered into the field of hydrogen train market in June 2020. The company is presently trying to develop an LRV with 70km/hr speed and capacity to run 150km in a single charge using 95kw of fuel. It may introduce it in the Ulsan Project.

Hyundai Rotem is a famous rolling stock manufacturing company in South Korea and has won many contracts regarding hydrogen reforms. Some of the recently won contracts are Gangwon Techno Park and the Ministry of Trade, Industry and Energy, and Uiwang Research Institute.

According to the agreement, Hyundai Rotem will contribute by developing low-floor rolling stock, upgrading infrastructure and installation of signalling systems; provide hydrogen charging stations and operations of LRVs.

Additionally, Ulsan city will function as an administrative centre for the approval of test lines and installment of hydrogen charging stations for LRVs.

According to the estimates,  this project is expected to complete by the year 2027. Furthermore, these LRVs will be tested on lines that are presently not in use. These lines are 4.6 km long and connect to Ulsan port.

This collaboration will also result in the installation of hydrogen charging points and the construction of a new depot in the city.

LRVs will be only emitting water as emission and will be equipped with air purifiers which will be able to purify 800ug of particles and will release 107.6ug of clean air in an hour.

In 2018, hydrogen-powered Hyundai car was launched with the similar technology.