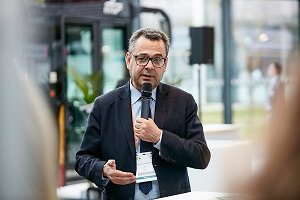 Brussels, Belgium (Urban Transport News): The UITP Executive Board confirmed the reappointment of Mohamed Mezghani as UITP Secretary General for a new five-year term. This was announced externally during the General Assembly that took place in June in Brussels.

Mohamed has been the Secretary General of UITP since 2018, when he began his first term in January of that year.

"I’m proud of the accomplishments of the association in the past 5 years, which would not have been possible without the excellent collaborations between our diligent staff and engaged members. I’m looking forward to the coming mandate and thank the Executive Board for putting its trust in me yet again," said Mohamed Mezghani.

"I’m pleased that Mohamed has been re-appointed as Secretary General of UITP for the coming five years. The past mandate has proven that under his leadership, UITP is in good hands. I’m hopeful that the association will continue to reinforce itself as the international association for all urban transport related matters – growing its global membership and reach in the process," said Khalid Alhigail, UITP President.

As Secretary General, Mohamed made it a priority to widen the scope of public transport beyond mass transit – what we call ‘Redefining Public Transport’. His vision was to embrace on-demand and shared mobility solutions, to offer door-to-door transport to the end consumer. This has been well appreciated and adopted by the sector.