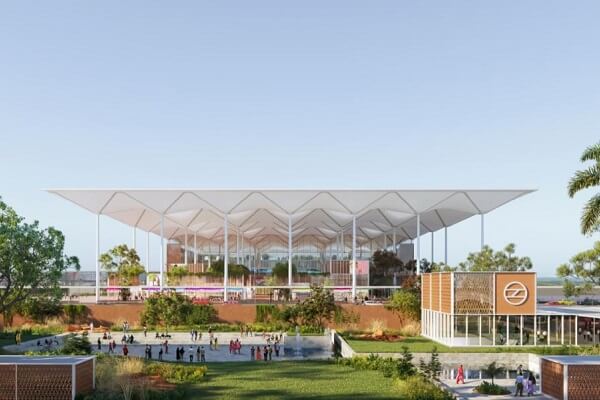 Noida, India (Urban Transport News): Uttar Pradesh Chief Minister Yogi Adityanath today approved the design, name and new logo of the international airport to be constructed in Jewar. The proposed airport is expected to be built in an area of around 1,334 hectares at a cost of Rs 29,650 crore in Greater Noida.

The first look of the design has been approved. Saras (stork), the state bird, has been chosen as the logo and the name of the airport will be Noida International Greenfield Airport.

"This airport will become the pride of India and will be one of the best in the world. We will present it as a global brand," said Chief Minister. He said the Jewar airport will lead to the development of industrial infrastructure that will increase employment opportunities, encourage manufacturing and exports.

The land for the project has already been acquired by the Yamuna Expressway Industrial Development Authority (YEIDA) in Noida.

Last week, Swiss developer Zurich Airport International had selected a consortium consisting of Nordic, Grimshaw, Haptic and STUP as the architects to design the passenger terminal of Delhi Noida International Airport (DNIA) at Jewar through a three-phase design competition between June and August 2020.

The winner was selected from three shortlisted teams with demonstrated experience in airport design - Gensler/Arup; Nordic, Grimshaw, Haptic and STUP; SOM /Mott McDonalds. The design competition was conducted under exceptional circumstances this year, and the architects prepared and presented their designs collaborating and communicating remotely.

We are pleased to partner with Nordic, Grimshaw, Haptic and STUP to design this long-envisioned strategic project at Jewar. The team created the winning design with an efficient layout, convincing design language, multiple high-quality areas, spaced out with lush greenery with a balanced concept for both energy savings and a tangible sense of sustainability.

The design of the airport will encompass parameters such as short and efficient passenger flows, digital services, and commitment to minimal environmental impact.

On October 7, the Uttar Pradesh government and Zurich Airport International had signed a concession agreement to commence the construction of the airport at an estimated cost of Rs 29,560 crore.

Once fully constructed, the airport will be the second international airport serving the National Capital Region of Delhi and the fast-developing Yamuna Expressway Industrial Development area between Delhi and Agra.