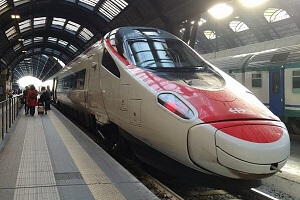 New Delhi (Urban Transport News): German Ambassador Martin Ney submitted detailed feasibility study report for the 435 km long Chennai-Mysore High Speed Rail corridor to Railway Board in New Delhi. If the report approved by the Ministry of Railways then travel time between Chennai and Mysore will be cut down by more than five hours by 2030. The proposal for implementing a high-speed rail network between the two cities is initiated by the German government.

German Ambassador Martin Ney has submitted the feasibility study report for the 435 km high-speed rail network between Chennai and Mysore to Chairman Railway Board,  Ashwani Lohani on Thursday.  According to the report, the Chennai-Mysore High-Speed Rail Corridor will cover a distance of 435 km and the maximum speed of the high-speed train will be 320 km per hour resulting in an overall reduction in travel time these two cities from the present seven hours to two hours and twenty minutes. “The study was both commissioned and financed by the German government.

The route was found to be not only extremely viable but also prove to be the most effective solution to manage traffic growth”, said Martin Ney German Ambassador. The estimated infrastructure cost of the high-speed rail project will be around ₹1 lakh crore and an additional cost of ₹150 crore for rolling stock. In the detailed feasibility study report, it has been stated that  Chennai-Arakkonam-Bangalore-Mysore route will have 85% elevated and have 11% tunnels. If implemented it will reduce total travel time between Chennai and Bangalore by 100 minutes and between Bangalore and Mysore by 40 minutes. “The proposal is an exciting one and we are reviewing it at the moment.

The Germans studied both mixed modes and dedicated mode and we decided that a detailed study of dedicated mode was more viable. We are expecting that we will be able to ground some passengers from airlines when they see that the travel time has been reduced so drastically. Unless one lives near to the airport, trains will be faster than airlines once this kind of high-speed rail network is introduced”, said Ashwani Lohani, Chairman Railway Board. Sources said that the fare of the proposed Chennai-Mysore high-speed rail corridor will be comparable to current airfare between both cities. However, none of the Railway officials wanted to come on record on the fare structure of the proposed high-speed rail corridor.

According to the report if the proposal accepted by the Ministry of Railway then the route will be operational by 2030. In the implementation of the project will take total three years time in planning and six years in the construction. The various agencies are also conducting feasibility studies on other routes including New Delhi-Mumbai, Mumbai-Chennai, Delhi-Kolkata, Delhi-Nagpur, and Mumbai-Nagpur.