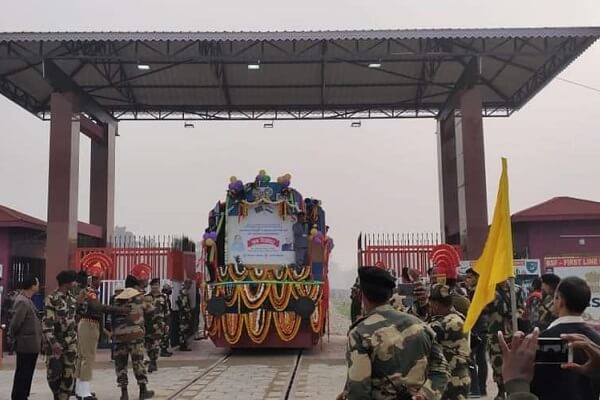 New Delhi, India (Urban Transport News): In an event which will go down the history of both India and Bangladesh as a major step towards boosting people to people contact; Prime Minister of India, Narendra Modi and Prime Minister of Bangladesh, Sheikh Hasina today jointly inaugurated a railway link between Haldibari in India and Chilahati in Bangladesh during the PM level virtual bilateral summit.

I was honoured to review our diverse ties with Bangladesh during my Virtual Summit with PM Sheikh Hasina today. We also unveiled a stamp honouring Bangabandhu and launched the Bangabandhu-Bapu museum and the Chilahati-Haldibari rail link.

"Next year, India and Bangladesh will jointly commemorate Mujib Borsho and 50 years of establishment of our diplomatic ties. I look forward to visiting Dhaka for paying my homage to the life and ideals of Bangabandhu," Prime Minister added.

Later on the day, a goods train was flagged off by the Railway Minister of Bangladesh Md. Nurul Islam Sujan from Chilahati station entered India passing through the international border thus heralding a new era for the people living in both the countries.

The Haldibari – Chilahati rail link was operational till 1965. This was part of the Broad Gauge main route from Kolkata to Siliguri during the partition.  Trains traveling to Assam and North Bengal continued to travel through the then East Pakistan territory even after partition. For example, a train from Sealdah to Siliguri used to enter East Pakistan territory from Darshana and exit using the Haldibari - Chilahati link.  However, the war of 1965 effectively cut off all the railway links between India and the then East Pakistan. So on the Eastern Sector of India partition of the railways thus happened in 1965.  So the importance of the reopening of this rail link can be well imagined.

In pursuance of the joint declaration in the Inter-Governmental Railway Meeting (IGRM) held in Delhi in May 2015; Railway Board sanction for construction of a new BG line from Haldibari station to Bangladesh Border for connection with Chilahati (Bangladesh) [Length - 3.50 km] in 2016-17 in order to reopen this erstwhile rail link. Indian Railways has restored the tracks up to the international border from Haldibari station at a cost of Rs. 82.72 crores. Bangladesh Railways has also accordingly undertaken up-gradation and laying of missing tracks on their side from Chilahati station to the international border. On the Bangladesh side Chilahati – Parbatipur – Santahar - Darshana existing line is already in broad gauge.

Haldibari - Chilahati route opened on 17.12.2020 will be beneficial for transit into Bangladesh from Assam and West Bengal. This newly opened rail link will enhance rail network access to the main ports, dry ports, and land borders to support the growth in regional trade and to encourage economic and social development of the region. Common people and businessmen of both the countries will be able to reap the benefit of both goods and passenger traffic, once passenger trains are planned in this route. With this new link coming into operation, tourists from Bangladesh will be able to visit places like Darjeeling, Sikkim, Dooars apart from countries like Nepal, Bhutan etc. easily. The economic activities of these South Asian countries will also be benefitted from this new rail link.