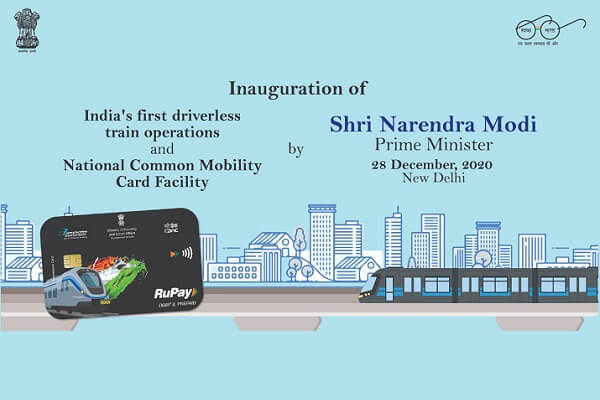 New Delhi, India (Urban Transport News): Prime Minister Narendra Modi today flagged off India’s first-ever driverless train operations on the Delhi Metro’s Magenta Line (Janakpuri West – Botanical Garden) as well as the fully operational National Common Mobility Card (NCMC) services on the Airport Express Line via video-conferencing today.
These innovations are going to herald a new era of travelling comfort and enhanced mobility for the National Capital Region (NCR)’s residents. With the commencement of driverless trains on the Delhi Metro’s Magenta Line, DMRC will enter the elite league of seven percent of world’s Metro networks which can operate without drivers.
After starting driverless services on the 37 kilometre long Magenta Line (Janakpuri West – Botanical Garden), another major corridor of the Delhi Metro, the 57 kilometre long Pink Line (Majlis Park – Shiv Vihar) will also have driverless operations by the mid of 2021. After this, Delhi Metro will have a driverless network length of about 94 kilometres, which will be approximately 9 per cent of the world’s total driverless Metro network.
Speaking on the occasion, the Prime Minister termed today's event as an attempt to make urban development future-ready. He said preparing the country for future needs is an important responsibility of governance. He lamented the fact that a few decades ago, when the demand of urbanisation was felt, there was not much attention given to the needs of the future, half-hearted work was done and confusion persisted. He said unlike this, modern thinking says that urbanization should not be seen as a challenge but used as an opportunity to build better infrastructure in the country, an opportunity through which we can enhance Ease of Living.
He said this difference of thinking is seen now in every dimension of urbanization. He added that in 2014, only 5 cities had metro rail and today, metro rail is available in 18 cities. By the year 2025, we are going to expand it to more than 25 cities. In 2014, only 248 km of metro lines were operational in the country and today it is about three times, more than 700 kilometers. By the year 2025, we are trying to expand it to 1700 km. He stressed that these are not just figures, they are proof of ease of living in the lives of crores of Indians. These are not just infrastructures made of brick and stone, concrete and iron, but are evidence of the fulfillment of the aspirations of the citizens of the country, the middle class of the country.
The Prime Minister listed different types of metro rail on which work is being carried out. On the Regional Rapid Transit System (RRTS) between Delhi and Meerut, the Prime Minister said it will reduce the distance of Delhi and Meerut to less than an hour. He said in cities where passenger numbers are less, work is being done on the MetroLite version. MetroLite version would be constructed at 40 percent cost of normal metro. He further added that Metro Neo is being worked in cities where the ridership is less. It would be built at the cost of 25 percent of the normal metro. Similarly, water metro would be an out of the box thinking. For cities where there are large water bodies, the water metro is now being worked on. This will provide last-mile connectivity to the people near the islands.
The Prime Minister said with the achievement of Metro Rail without a driver, our country has joined the select countries of the world where such facilities are available. He said a braking system in which 50 percent of the energy goes back into the grid when the brakes are applied are being used. Today 130 MW of solar power is being used in metro rail, which will be increased to 600 MW.
The driverless trains will be fully automated which will require minimum human intervention and will eliminate the possibilities of human errors. Delhi Metro has been a pioneer in introducing technology-driven solutions for passenger comfort and this is another step in the same direction.
The National Common Mobility Card, which will be fully operationalised on the Airport Express Line will also be a major milestone as anyone carrying a RuPay -Debit Card issued recently in the last 18 months by 23 banks (all these are NCMC compliant as per directions of the Department of Financial Services, Government of India) from any part of the country will be able to travel on the Airport Express line using that card. The same facility will become available on the entire Delhi Metro network by 2022.
Talking about the Common Mobility Card, the Prime Minister said that providing the same standards and facilities for modernization is very important. The Common Mobility Card at the national level is a major step in this direction. This one card will give integrated access to the commuters wherever they travel, whichever public transport they take.

Taking the example of the Common Mobility Card, Prime Minister dwelled on the process of consolidating all the systems. Through such consolidation of systems, the strength of the country is being harnessed in a more coordinated and efficient way.  “Like One Nation, One Mobility Card, our government has done many things in the past years to integrate the systems of the country,” Modi said.

The Delhi Metro currently operates on a network of about 390 kilometres with 285 stations spanning 11 corridors (including NOIDA – Greater NOIDA). Pre Covid, about 60 lakh journeys were being performed every day on the Delhi Metro network making it the mass transportation backbone of the National Capital Region (NCR).
The Metro rail scenario in the entire nation has undergone a massive transformation in the last six years. While in 2014, only 248 kilometres of Metro lines were operational in five cities, presently 702 kilometres of Metro lines are operational in 18 cities in India. In the days to come, over a thousand kilometres of new lines shall be added and about 27 cities in the country will have Metro connectivity.
By 2022, when the nation celebrates its 75th Independence Day, India will have a combined Metro network of over a thousand kilometres which will carry more than a crore passengers every day.
For more details, please explore the Delhi Metro page of Urban Transport News.