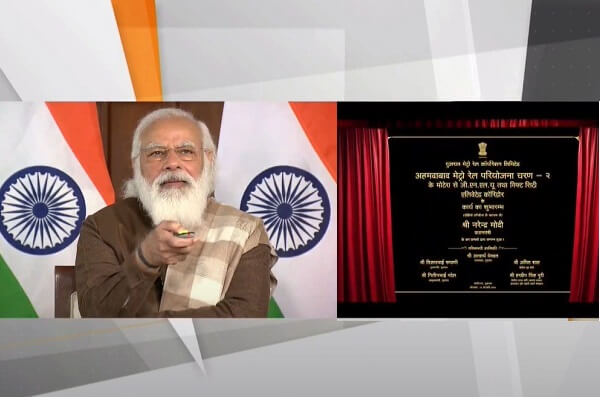 Ahmedabad Metro Project Phase-II is 28.25 km long with 2 corridors. Corridor-1 is 22.8 km long, from Motera Stadium to Mahatma Mandir. Corridor-2 is 5.4 km long, from GNLU to GIFT City. The total completion cost of the Phase-II project is ₹5,384 crores.

Addressing the groundbreaking event, Prime Minister said, "Work on projects worth over ₹17,000 crores has been initiated. It showcases our commitment to the development of the nation even during these testing times of the pandemic. Surat and Ahmedabad boost India's self-reliance. We are planning the second Metro corridor for Ahmedabad".

"Investments we have done today will enhance the lives of our countrymen in the times to come. In 27 cities all over the country, we have started work on over 1,000 km of the metro network," he added.

Prime Minister said that Surat is business opportunities will grow with the help of Metro. Metro will fulfill future requirements of both cities. Surat is the 2nd major city in Gujarat after Ahmedabad to be connected to modern public transport systems like the metro. Surat is the 4th fastest growing city in the world. It perfectly showcases the undying spirit of Surat.

He further said that Gandhinagar now has many top universities and institutions. Employment opportunities for the youth have grown in Gandhinagar. Gandhinagar is shaping India's future.

"Today, we are developing the transportation of cities as an integrated system. That is, bus, metro, rail should not run on their own, but work as a collective arrangement and should complement each other. A new airport is coming up in Dholera. Ahmedabad bullet train project is on track. Gujarat has transformed in the last two decades," PM added.