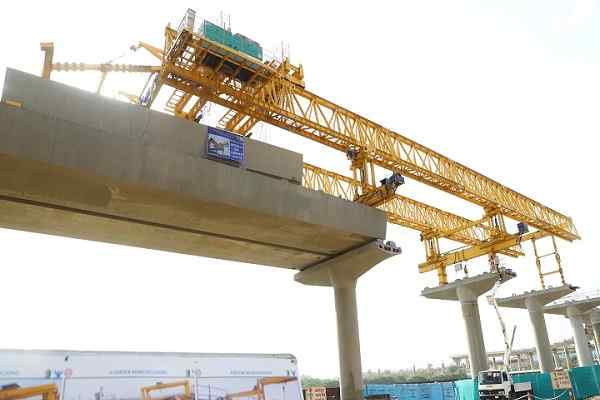 New Delhi, India (Urban Transport News): The Delhi Metro Rail Corporation (DMRC) introduced a major innovation in its construction technology by starting launching work on the Janakpuri West – RK Ashram Marg corridor with a specially designed Launcher attached with a Transporter for the launch of U-girders on its elevated section. The launcher started work near Majlis Park in the presence of DMRC’s Managing Director, Dr. Mangu Singh and other senior officials.
In the earlier phases of construction, erection of U-girders was done with the help of two cranes of capacity 350/400T which were placed at each pier location and the U-girders were transported at each pier location with the help of a long trailer having an approximate length of 42m. In a congested urban area like Delhi, it used to be very challenging to find adequate space for positioning these heavy capacity cranes which occupy a lot of space. In addition, transporting the U-girders of 28m length with such long trailers was also a herculean task as roads in the NCR are  either too congested or have massive traffic volumes even during the night time.  These limitations often discouraged the use of U-girders in construction in spite of the fact that the U-girders are the most suitable structures for viaducts in  terms of cost and time.
This new state of the art Launcher with Transporter is fully electric with much  higher output in comparison to the conventional launchers/cranes.  The Transporter  carries the U-girder from one designated point and moves forward on rails laid on  the already erected U-girders to further add more U-girders from the feeding point  to the launcher. As a result, the U-girders are to be transported on trailer only  up to the feeding point identified at a suitable location and not for the entire  length of work. This results in much less requirement of space.
This new Launcher is 62m long having a total weight of 230T.  It can negotiate gradients upto 4% and 200m radius curves.  The Transporter which transports the  U girder is 41.75m long having a total weight of 35T.  It can travel with a speed  of 3 kmph at no load and 2 kmph at full load.
The output of this new innovation is quite high as compared to the conventional method of launching of U-girders.  On an average, 4 to 6 U-girders per day can be erected with this Launcher whereas with the conventional method, about 2 U-girders can be done in congested working environments like in Delhi – NCR. The erection work  of U-girders with conventional cranes can be done only during the night as it requires  blocking of roads to position the cranes. Whereas in case of this new Launcher with  Transporter, U-girders are transported with the Transporter on the erected viaduct  without any interface with road from a single identified feeding point.
Such a technology is being used for the first time in India.  The total load of U-girders to be erected is as high as 160 ton and 462 such U-girders are to be erected in the contract. This launcher today has been made operational for the construction of a 9.5 kilometre long viaduct  from Mukarba Chowk to Ashok Vihar covering four stations namely Bhalswa, Majlis Park, Azadpur  and Ashok Vihar and a connection to depot from Majlis Park.