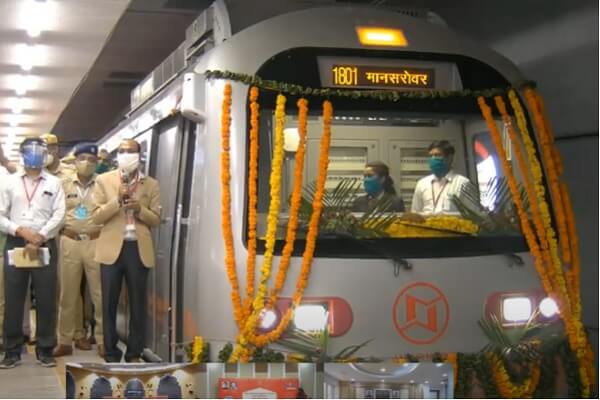 The 2.35 km long underground metro stretch is the last leg and the part of the 12 km long north-south corridor (Mansarovar - Badi Chaupar) of Phase I of the Jaipur Metro Rail project which contains three metro stations viz. Chandpole, Chhoti Chaupar and Badi Chaupar.

Delighted to attend the inauguration of 2.12 km underground line of Metro Rail from Chandpole to Badi Chaupar by Hon’ble CM, Rajasthan in the UNESCO World Heritage City of Jaipur. With this, nearly 12 km of the metro system is now operational in the Pink City.

With this new line total commuters in Jaipur will rise from 20,000 to 40,000 per day. It will provide affordable, comfortable, convenient, punctual, safe & environment-friendly modes of the daily commute. We now have 700 Km metro rail network operational in 18 cities across India.

The construction of the underground section was commenced in 2013 after a formal foundation stone laid by ex. Prime Minister of India Dr. Manmohan Singh on 21st September 2013 and after 7 years it was completed by ITD Cementation India in February this year.

A two-days safety inspection of this section was carried out from March 17-18, 2020 by the Commissioner of Metro Rail Safety (CMRS). CMRS has given its conditional approval to start metro services on this section for the public on 22nd March 2020.

Talking about the benefits, Jaipur Metro Rail Corporation (JMRC) officials said that it is crucial for the viability of the entire corridor. It will reduce vehicular traffic and parking requirements in the walled city. It will also reduce pollution near the heritage monuments.

The phase I of the Jaipur Metro Rail project covers a total of 12 km distance through 11 stations. Out of, 9 stations are built elevated and 2 are built underground. The first section of Phase I was opened for the public on 3rd June 2015.

For more details about the project, please explore the Jaipur Metro page of Urban Transport News.