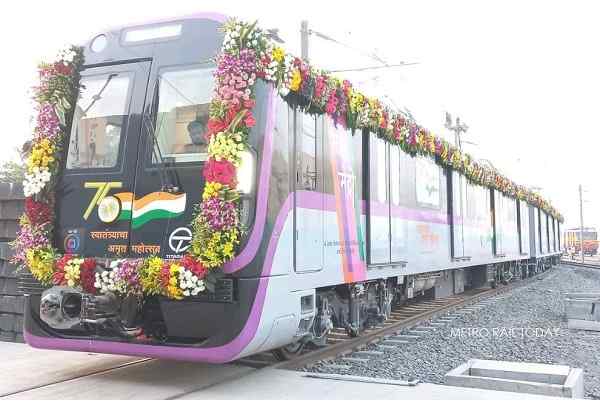 Kolkata, India (Urban Transport News):  Kolkata-based Titagarh Wagon Ltd has announced that the Government of Italy, through its investment arm-Invitalia has taken a strategic stake in Titagarh Firema SpA (TFA), the subsidiary of the company.

"The Government of Italy will subsequently own a 30.30% stake in Titagarh Firema, for an investment of Euro 10 million. Their investment has been accompanied by an investment from a private Equity Fund based out of UAE, Hawk Eye DMCC, which has invested Euro 4.5 million and acquired 13.64% equity share capital of the Company," said the press statement.

"The existing promoters of the company and shareholders (Titagarh Bridges & International Pvt Ltd) have also invested Euro 5.4 million as a part of the investment agreement and recapitalisation plan agreed by TFA with the Government agency and the Private Equity fund. The new equity has been issued at face value of Euro 1/- per share translating into an Enterprise Value of the company at Euro 118 million and an Equity valuation of Euro 33 million," it has been added.

"This is a strategic transaction and this recapitalisation exercise will lead to overall value creation and resultant appreciation of the valuations of TFA. The Company along with its subsidiary Titagarh Bridges & International Private Limited (TBIPL) continues to hold shares worth Euro 16.40 million representing 49.70% of TFA," added.

“It is indeed a momentous occasion for Titagarh to have been trusted by a Sovereign who has agreed to join our venture as a minority shareholder. This equity infusion by Invitalia will not only help recapitalise TFA, it will also bring about great branding and strategic value addition. I thank them as well as the private equity fund for their trust and faith in our Italian venture. This investment will allow TFA to expand its business and achieve its target of reaching a production of 20 EMU coaches per month and developing into a boutique and high-quality Italian coach producer for Italy and Europe," said Umesh Chowdhary, Vice Chairman and Managing Director of Titagarh Wagons Limited.

"Both companies would operate independently in their respective market bases since both companies are completely self-sufficient and competent to cater to their market needs. Titagarh India has also set up a design and engineering center in Hyderabad recently. However, both companies would continue to leverage and take advantage of the immense synergy that they offer to each other in terms of joint engineering and manufacturing taking advantage of the Italian design and styling and Indian competitive cost of production," he added.

"Titagarh Wagons recently bagged the single largest contract from the Indian railways for the manufacture and supply of 24,177 wagons to the Indian Railways worth INR 7,843 crores and have already started the execution of this contract. The total order book of Titagarh Wagons stands at an impressive INR 10,050 crores which is 6.8 times the revenue generated in FY 22. Titagarh Wagons reported sales of INR 1,475 crores in FY 22 and of INR 426 crores in Q1FY23 respectively. While the EBIDTA and PAT of Titagarh Wagons on a standalone basis were INR 182 crores and INR 79 crores respectively for FY22 and INR 49 crore and INR 23 crore respectively for Q1FY23, the same got impacted due to the consolidation of the losses suffered in Italian subsidiary and the consolidated EBIDTA and Loss for FY22 was INR 169 crore & 0.69 crore and was INR 39 crores & 0.06 crore for Q1FY23 respectively," he said.

"Now, as a result of these equity investments, TFA would cease to be a subsidiary of Titagarh Wagons thereby completely changing the method of consolidation from a complete line-by-line consolidation of the entire financial results of TFA, to the Equity Method of accounting as applicable for Associate companies, under which only the pro-rata share of Profit or Loss of TFA based on the shareholding percentage of TWL will be consolidated. There will not be any consolidation of the Balance sheet as a result of this deconsolidation. This will further strengthen our Balance Sheet and significantly improve our return ratios. As on 31st March 2022, Titagarh Wagons’ net debt on a standalone basis was INR 50 crores," he further added.

"The Indian Railways have announced very large investment plans for both Freight and Passenger rolling stock and components and Titagarh is fully geared up to participate in them. Titagarh is also actively participating in various metro tenders floated in India under the Make in India and Atmanirbhar policies of the government. We are in very exciting times where the Honourable Prime Minister’s vision of making India into a USD 5 trillion economy is seeming to be touching distance. Titagarh is fully committed to play its humble and sincere role towards this mega goal of our visionary prime minister, Sri Narendra Modi Jee,” Chowdhary commented.

Titagarh Firema was acquired by Titagarh group in 2015 from extraordinary administration and as a part of the acquisition agreement, Titagarh had to inherit old contracts signed by Firema worth Euro 225 million, and a large part of these contracts were difficult and loss-making contracts.

While TFA was able to restart production within weeks after acquisition, by executing the profitable contracts thereby generating a revenue of Euro 107 million and an EBIDTA of Euro 10 million in FY 2017, the subsequent execution of the legacy contracts thereafter followed by the disruption during the covid pandemic caused large losses to the company in the last few years.

However, TFA, which designs and manufactures state of the art metro and other passenger trains in Europe, has been able to complete the execution of the bulk of the onerous and legacy contracts, which will be fully executed within this quarter, and has a strong order book of almost Euro 500 million which entirely constitutes of new orders.

TFA has very strong designs, research & development capabilities in metros, semi high-speed electric trains, coaches and other mass mobility solutions and occupies an important place in Italian industrial space employing about 320 people directly at its facility in Caserta and has an engineering centre in Savona.

Titagarh Firema has recently developed two brand new trains for Pune Metro and Catania Metro, Sicily which within 24 months have been very well received by the Customers. TFA is now developing trains for the Lazio Region under a framework contract signed recently by them for Euro 282 million 21st January 2022. TFA has also recently announced its plans to enter into the day and night coach market by introducing modern aluminium coaches with a speed potential of 200 km per hour and is also exploring the entry into the freight wagons market in Europe which is very buoyant.

The Italian Government had announced a mega program to come out of the aftermath of Covid- the Program for National Reconstruction and Resilience (PNRR) of Euro 180 billion, which inter alia included massive investments into the Railways worth almost Euro 40.40 billion. TFA is very well poised to actively and effectively participate in these projects.

Meanwhile, owing to the complete Transfer of Technology, which was a part of the Pune Metro project agreement, Titagarh Wagons has completed setting up its modern coach manufacturing facility in Kolkata which is capable of producing up to 250 coaches per month. The production of Aluminium coaches is already in full swing in Titagarh’s Kolkata facility from where it is manufacturing 93 coaches for Pune metro and Titagarh has recently signed a contract to supply 204 stainless steel metro cars under subcontract from CRRC China.

Under this agreement, the technology for the Stainless-steel coaches will be provided by CRRC to Titagarh and this would make Titagarh wagons as the only Indian company with capability to produce both aluminium as well as stainless steel coaches.

Since Titagarh Wagons has already supplied more than 350 EMU and MEMU to Indian railways in the past and has also started regular supplies of the 102 metro cars from its Indian factory, the Company is now able to meet all the technical and financial eligibility norms independently in almost all the Metro coach tenders floated in India. In rare cases for very large tenders, the Company participates in a consortium arrangement with Titagarh Firema on a case-to-case basis.