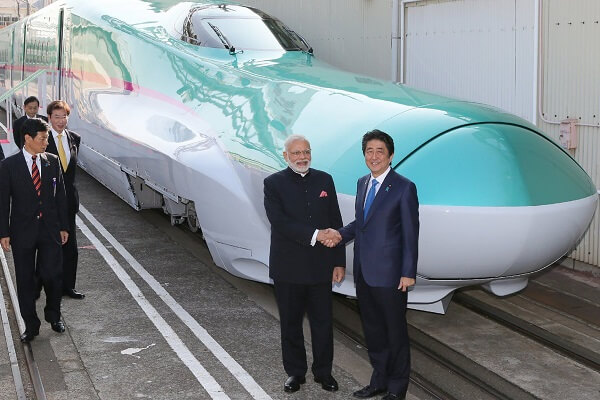 New Delhi, India (Urban Transport News): The first Bullet Train project of India has suffered a major setback due to the outbreak of the COVID-19 Pandemic. The first bullet train is to be run on a 508 km route between Mumbai and Ahmedabad.

The project has already been delayed due to the acquisition of land and now Covid-19 has derailed its entire timeline. The Indian Railways as well as the executing agency National High Speed Rail Corporation Limited (NHSRCL) is no longer in a position to tell when the Mumbai-Ahmedabad High Speed Rail project will be completed and when India's bullet train will run on the track.

The foundation stone for the bullet train was laid exactly three years ago. At that time, the target of 15 August 2022 was set to launch the first bullet trains in India. This day marks 75 years of India's independence. A total of 1396 hectares of land was to be acquired by 31 December 2018 to complete the bullet train project on time. But till now only 64 percent of the land has been acquired.

This work has been badly affected by the global epidemic (COVID-19). After several months, the Joint Measurement Survey work has started in the most troublesome state of Maharashtra in land acquisition. It is expected that this work will be completed in the next three months. After that, there will also be a challenge to prepare local landowners and farmers to leave the land.

Therefore, until the land acquisition work is completed, the railway officials are also not in a position to speak on the target of completing this project.

However, Yadav in a press briefing also denied media reports that the Japanese firms were not keen on the project, saying "it is true that the tenders and land acquisition were delayed a bit due to the coronavirus pandemic, but I can say that the project is progressing well."

As the COVID19 situation improves, the Railways will start the bidding process and within the next three to six months, we will be able to get the status of land acquired. It will then be the appropriate time to reassess the project. Once the land status is ascertained, we can provide a real timeframe for the completion of the project.

Bullet trains in India are being started in collaboration with Japan. According to the current estimate, 1 lakh 10 thousand crores will be spent on this project. Rs 88,000 crore is being given to India as a loan from Japan. On which India will have to pay 0.1 percent interest. However, it is believed that due to the delay in the project, there can be a big increase in the cost.

India is also getting the best and safe Shinkansen technology of bullet trains from Japan. The distance of 508 kilometers bullet train will be completed by in just two hours and seven minutes. Bandra-Kurla Complex, Thane, Virar, Boisar, Vapi, Bilimora, Surat, Bharuch, Vadodara, Anand, Ahmedabad and Sabarmati are to be built on this route.

India's first bullet train will have an average speed of 320 kmph and will run at a maximum speed of 350 kmph. On this route, 468 km long track will be elevated, 27 km will be inside the tunnel and the remaining 13 km will be on the ground.

For the first time in the world, a 10-car bullet train will run on the Mumbai-Ahmedabad High Speed Rail route. This train will have a seating capacity of 750 people. Later, according to the demand, it has been planned to convert it into a 16-car bullet train. The 16 car engine bullet train will have a seating capacity of 1200 people. In the beginning days, about 36,000 people will travel in bullet trains every day and after 30 years, the number of people traveling in it is expected to reach around 2 lakh daily. Initially, 35 trains will run on this route in one direction every day.