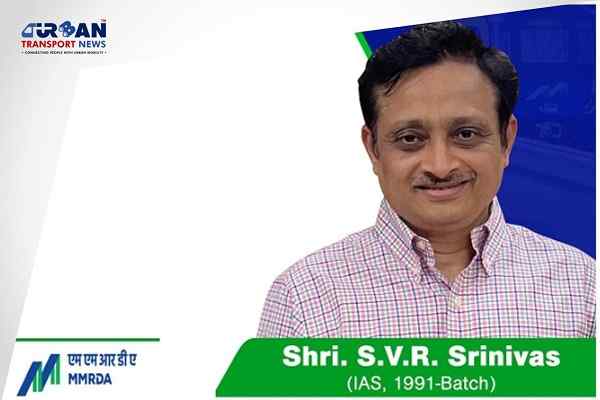 Mumbai, India (Urban Transport News): The Maharashtra government on June 3, 2021, appointed S V R Srinivas as the new Metropolitan Commissioner of Mumbai Metropolitan Region Development Authority (MMRDA). Srinivas takes charges from R A Rajeev, who has been superannuated on May 31, 2021, after completing the first three-month extension by the government.

"As per the order by the Maharashtra State Government, Shri. S.V.R. Srinivas (IAS, 1991-Batch) has been appointed as the new Metropolitan Commissioner of MMRDA," said MMRDA.

According to sources, SVR Srinivas who was Principal Secretary, Housing Department, Government of Maharashtra was in the race along with Mahesh Pathak and Milind Mhaiskar for the post.

Srinivas, an IAS officer of the 1991 batch from the Andhra Pradesh cadre, earlier worked in MMRDA as an Additional Commissioner. After the superannuation of RA Rajeev, Dr. Sonia Sethi was given additional charge of Metropolitan Commissioner of MMRDA and the appointment of Srinivas has been announced only after 3 days of charge taken by her.

Srinivas has now the responsibility to implement the major infrastructure projects including Mumbai Metro corridors, Mumbai Trans Harbour Link (MTHL) and other projects in Mumbai Metropolitan Region (MMR). Recently, MMRDA has commenced a trial run of the metro train on Mumbai Metro's Line 2A and Line 7.