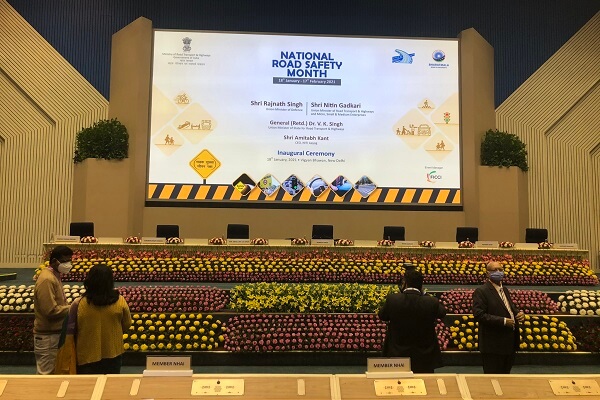 During the last few years, a road safety week was being organised, but considering the importance of the issue, a month-long programme has been made this year. The inaugural function was launched by Union Minister for Defence Rajnath Singh and Union Minister for Road Transport and Highways & MSME Nitin Gadkari. Minister of State for RTH, Gen (Retd) Dr VK Singh and CEO, Niti AAYOG, Amitabh Kant were also present.

A film on Road safety was launched on the occasion, besides flagging off of a National Championship Safe Speed Challenge from Amritsar to Kanyakumari and giving away of awards for Road Safety. State Governments, PSUs, and Insurance companies also participated in awareness-creating activities, with seminars, walkathons, poster-making competitions, etc.

Road safety includes road awareness. Not only the drivers, but the riders have to be aware of their responsibilities towards the causes of accidents to prevent them. He said, accident fatalities not only hurt a family but also cause severe loss of national resources. He informed that nearly 3 per cent GDP loss can be saved by spreading safety awareness.

Gadkari informed that in India, a total of 1.5 lakh people died, while more than 4.5 lakh people got injured in road accidents every year, resulting in social-economic losses from accident deaths equivalent to a shocking 3.14% of GDP every year. He said, 70% deaths are in the age group of 18 to 45-year-old people, which is nearly 415 people dying per day in India.

He said the Government is committed to reducing road injuries and deaths.  Several steps were taken towards achieving zero road fatalities vision on Indian Roads by 2030 by taking various initiatives, policy reforms, and adoption of the Safe Systems.  "He strongly believes that the Government can succeed only when Road Safety would become a grass-routed mass movement only and only through ‘Jan-bhaagidari’ and ‘Jan-sahbhaag’. Governments at all levels, union, state and municipal authorities must play as facilitators to make this Jan-Sahbhaag successful," he added.

Gadkari suggested that all MPs, MLAs, and other public representatives provide a platform through District level Road safety committee and involve the Police, doctors, paramedics, professionals, NGOs, students, and all individuals to take Road Safety on a mission mode in their respective constituencies. He informed that nation-wide activities have been already planned to be conducted throughout the country in association with State Govt./Union Territory administrations, NHAI, NHIDCL, OEMs and NGOs.

He further said that several measures are being taken to reduce road accidents by Restructuring and Strengthening 4E’s of Road safety. These are extremely important: Engineering, Education, Enforcement, and Emergency Care Services.

Minister of State for RTH Gen (Retd) Dr VK Singh said, road safety is not a month-long programme, it is rather a life-long affair. He said one has to remain vigilant both while driving as well as from the drivers of other vehicles on the road. He called upon reaching out to everybody for making them aware of the importance of road safety. He said, there is a need to adopt a culture where people not only save themselves but also others.

CEO Niti AAYOG Amitabh Kant underlined Government’s commitment towards road safety, saying that a vast number of initiatives have been taken in this direction during the last few years. He stressed upon the need to upgrade the country’s standards to global levels. For this, technology is required to be integrated with monitoring systems.