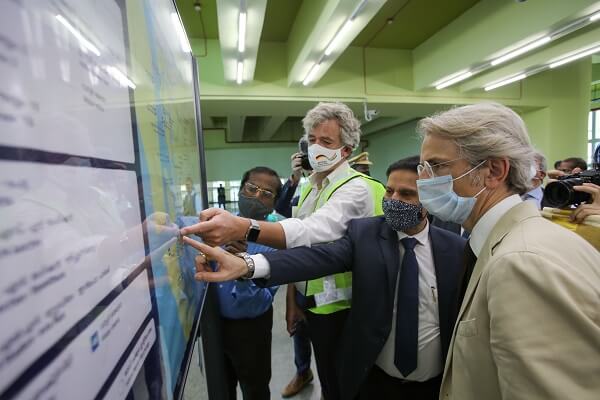 Kochi, India (Urban Transport News): With the aim to develop and support projects related to environmental protection, a group of funding agencies from various countries like France, Germany and the members of the European Union (EU) are working together on a detailed plan to fund more eco-friendly projects in Kerala in the coming years.

To mark the fifth anniversary of the Paris Agreement on climate change, a nine-member delegation comprising of the French, German and European Union Ambassadors visited KMRL's Water Metro construction sites, the Operation Command and Control Centre at Muttom, and the Cochin Shipyard on Saturday.

“We will select the most innovative, eco-friendly and gender-oriented projects that focus on mobility and transportation to reduce carbon emission,” said Emmanuel Lenain, Ambassador of France to India.

"We would support eco-friendly projects not only in Kochi, but also in the rest of Kerala, and added that the EU, along with France and Germany, would discuss and decide on the projects. They will assess the progress of the works towards an integrated transport system and discuss future cooperation in various other projects," said Ugo Astuto, Ambassador of the European Union to India.

It has been said that the EU has already finalised a financial package for funding such projects, of which 30 percent is exclusively for those directly related to the protection of the environment, the diplomat added that green projects were going to become a major engine of growth and sustainable employment generation soon.

Germany’s Walter J Lindner further said that it was important for a city like Kochi to have an integrated transport system with last-mile connectivity. The envoys reviewed the progress made by the Kochi Metro Rail Ltd (KMRL) in the Water Metro project, which is financed by German investment bank KfW.

The three ambassadors’ visit will strengthen the state government’s as well as the KMRL’s relationship with these countries and the European Union. The KMRL successfully completed the first phase of Kochi metro with partial funding from the AFD. We are on the verge of commissioning the Water Metro Project, which is being co-funded by the KfW.

“We would be keenly looking forward to the support of the AFD and the KfW in more projects,” he added.