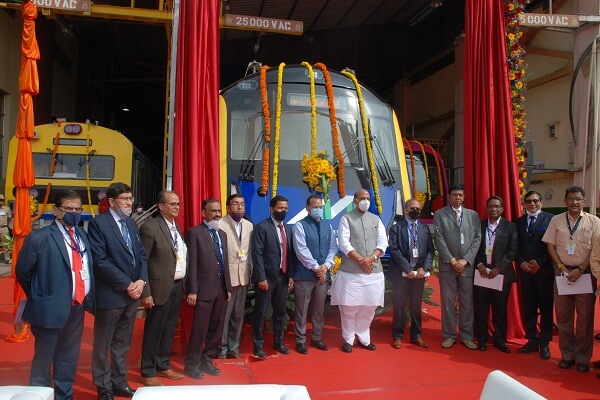 At BEML’s Bangalore Complex, Minister inspected the Rail Hangars, the array of BEML equipment on display (from its Defence & Aerospace, Mining & Construction and Rail & Metro Divisions) and the newly launched Industrial Design Centre.

I am truly overwhelmed with what I have seen at BEML manufacturing facility today. I’m proud of the good work the team of engineers and technicians are doing at BEML. I would also like to congratulate but bow before each and every member of BEML and wish that the wonderful work that is being done by the company should be made known to the nation. They are the real warriors of ‘Atmanirbhar Bharat’, taking India ahead.

Welcoming the Union Minister, Dr. Hota said, ”Hon’ble Raksha Mantri’s visit to BEML is a true reflection of the unstinted support and encouragement that he is providing. BEML’s foray into metro manufacturing has been a defining moment in the urban transportation scenario in India. With a major market share in the country in direct competition with well-established international players, BEML has made its mark as the only Indian company in this high technology field.”

Indigenously designed & developed state-of-the-art Driverless Metro trains are being manufactured at BEML’s Bangalore Complex. The cars will operate on 25 kV AC traction power and equipped with CCTV surveillance and with the provision to carry passenger bi-cycles in the coaches. The cars are made up of stainless steel body with a capacity of carrying 2280 passengers in 6 cars Metro train-set.

BEML bagged a total order of 576 cars for MMRDA’s MRS1 project, the largest order ever, amidst stiff completion in the presence of international players and the supply is scheduled progressively up to January 2024.

It may be recalled that BEML opened its Depot office recently at Charkop Metro Depot, MMRDA, Mumbai for commissioning, testing and round the clock services for Driverless Metro cars for Line 2A and 7 of the Mumbai Metro Rail Network.

Currently, BEML’s order book position looks healthy at over Rs 12,000 crores and with the Government’s push for ‘Atmanirbharta’ it may grow further.