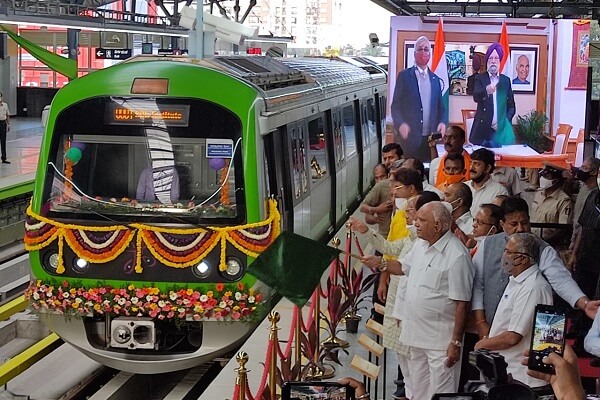 This section is an extension of the Green Line which is being implemented under Phase 2 of the Bangalore Metro Rail project. The 6.29-km elevated line having five stations namely Konanakunte Cross, Doddakallasandra, Vajrahalli, Thalaghattapura and Silk Institute.

This 56-km long project will be built at an estimated cost of ₹14,844 crores & will be based on a comprehensive mobility plan strategy of expanding reach & augmenting the capacity of the public transport system, promoting multi-modal mobility options & facilitating transit-oriented development.

Phase 2 of Bangalore Metro is being implemented at a cost of 30,695 crores. For this, the French Development Agency, European Investment Bank (EIB) and Asian Infrastructure Investment Bank have provided financial assistance of ₹1,440 crores, ₹3,973 crores and ₹2,330 crores respectively. Apart from this, the Asian Development Bank (ADB) has approved ₹3,465 crore loan for Phase 2A and 2B. The Japan International Cooperation Agency (JICA) is also evaluating the project to provide ₹3,700 crores for Phase 2.

After the opening of this section, Bangalore Metro has completed a 48-km operational metro rail network along two corridors. Among all the Metro lines, the Green Line is the longest line covering 30.5 km with a total of 29 stations between Nagasandra and Anjanapura. The extension of the Purple line along Mysuru Road from Nayandahalli to Challaghatta is expected to be the next section to be opened in May this year.

Bangalore Metro Rail Corporation (BMRCL) is now expecting at least 75,000 commuters footfall on a daily basis. According to officials, The new section will reduce the traffic congestion on the Kanakapura Road and South Bengaluru roads, which are known for the traffic snarls during peak hours.