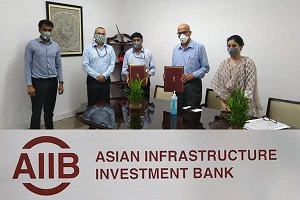 Mumbai, India (Urban Transport News): The Government of India, the Government of Maharashtra, Mumbai Railway Vikas Corporation and the Asian Infrastructure Investment Bank (AIIB) today signed a loan agreement for a US$500 million Mumbai Urban Transport Project-III to improve the network capacity, service quality and safety of the suburban railway system in Mumbai.

The Project is expected to increase network capacity in the region with the reduction in journey time and fatal accidents of commuters. It is estimated that among primary beneficiaries of the project, 22% are female passengers who will benefit from improved safety and quality of service.

Khare said that this project will assist in improved mobility, service quality and safety of passengers of the suburban railway system of Mumbai, by providing faster, more reliable and higher quality transport services compared to road-based transport. There will be direct safety benefits to passengers and the public through the introduction of trespass control measures.

With a population of 22.8 million (2011), Mumbai Metropolitan Region (MMR) is the most populous metropolitan region in India and is expected to reach 29.3 million by 2031 and 32.1 million by 2041. This population growth represents the core driver behind Mumbai’s urban expansion, compelling the state of Maharashtra to prioritize sound urban and infrastructure planning which balances economic activities, mobility as well as the optimization of environmental and social outcomes.

Around 86 percent of Mumbai commuters rely on public transport. However, supply has not kept pace with rising travel demand. The Mumbai suburban railway network, which carries three-quarters of all motorized travel (78 percent of passenger-km or eight million passengers per day) increasing at three percent annually, suffers from some of the most severe overcrowding in the world.

User experience is further compromised by the low amenity of carriages, substandard stations and station access, and serious safety concerns. Between 2002-2012, there were more than 36,152 fatalities (on average, 9.9 fatalities per day) and 36,688 injuries on the Mumbai suburban railway network. A key reason for accidents and deaths is trespassing at or between stations as well as overcrowding of both stations and train cars.

AIIB Vice President D.J. Pandian said that this project represents another major step in supporting our member countries in their efforts to provide transport capacity while removing transport bottlenecks, and thus improving the daily commuting experience of millions of Mumbaikars. In line with our Transport Sector Strategy, the Mumbai Urban Transport Project-III will also help in reducing carbon emissions by shifting passengers away from higher-carbon road transport towards efficient and convenient rail-based mobility. In addition, female passengers will benefit from improved safety and quality of service.

The total estimated cost of the Mumbai Urban Transport Project is $997 million, of which $500 million will be financed by the AIIB, US$310 million by the Government of Maharashtra, and US$187 million by the Ministry of Railways. The $500 million loans from the AIIB has a 5-year grace period and a maturity of 30 years.