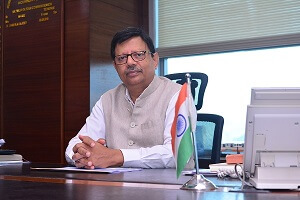 Mr. RA Rajeev, a 1987 batch IAS officer, is currently leading major infrastructure projects in India's financial capital Mumbai as Metropolitan Commissioner of Mumbai Metropolitan Region Development Authority (MMRDA) since 2nd May 2018. In a recent interaction with Urban Transport News, he frankly talked on the recent progress updates of various urban transport projects and cleared lots of doubts roaming in the mind of the Mumbaikars who are eagerly waiting for a speedy transformation in the city. Here are the edited excerpts:

Kindly brief our readers about your professional journey in the industry.

Mr. RA Rajeev: I belong to the 1987 batch of IAS, Maharashtra cadre. In my thirty-two years’ career, I have mainly worked for ten years in Urban Development, four years in Environment and four years in Finance in addition to other sectors at State as well as Central Government levels. Before joining my present assignment, I was working as Principal Secretary in the Finance Department, Government of Maharashtra. I have also worked as Joint Secretary (Finance), Department of Atomic Energy, Government of India. However, it is my long tenures in the Urban Development sector as Joint Municipal Commissioner and Additional Municipal Commissioner in Mumbai and Municipal Commissioner of Thane city, which has shaped my career path. Alongside this, my experience in Finance and Environment helps me handle urban issues with more effectiveness and efficiency.

What would you rate as the single most positive aspect of this incredible journey? The public transport in Mumbai Metropolitan Region, though it is one of the best-connected in India, is overburdened. Looking ahead, will the Metro make a substantial difference?

Mr. Rajeev: My strength lies in designing and executing urban infrastructure projects. So far I have completed an award-winning Gorai landfill closure project and Automated Traffic Signalling project in Mumbai and long-pending infrastructure projects in Thane like Kopri road overbridge and Vitawa road underbridge. At one point of time, there used to be a 75 percent share of public transport in the total daily passenger trips in the city. In this, the majority of the share was that of suburban trains. However, it has reduced to 65 percent today, as the population grew rapidly but the capacity for public transport has not been increased. At present, the public transport system is overburdened with a crush hour density of 12-18 persons per square metre in suburban trains, as against the ideal travel density of 6-8 persons per square metre of space. As a result, every day, 8-10 people die on tracks of Mumbai, which is a terrible situation. We are trying to increase the capacity of public transport by double as we are constructing 337 km of Metro network at a time in the metropolitan region. There has to be an alternative to highways and suburban rail network. Even a single operating Metro line (Versova-Ghatkopar) is being utilised to the fullest. However, one single line will not make a huge impact. Once all the lines are completed, a commuter will certainly be able to travel long distances in not more than an hour's time. This will also help ease the crushing crowd on the suburban railway and also lessen the traffic on highways.

What would be your vision of a comprehensive concept to ease urban mobility in a sprawling and fat expanding urban megapolis like Mumbai?  There are initiatives in some cities in Europe and the US, apart from Japan, to exploit the digital environment, like mobile apps, to include connections to feeder services, other modes of public transport and even booking parking space. Your comments on this are welcome.

Mr. Rajeev: We are currently focused on the cohesive development of the city with a focus on rapid infrastructural growth, along with a keen environmental-friendly outlook. The MMRDA will soon enable first and last-mile connectivity which will provide urban mobility solutions for seamless transport from one end to the other. An application would be available to commuters along with a payment gateway which will enable them to plan their journey through all the modes of transport. The application would suggest the fastest route and modes of transportation to their desired destinations.

Talking of learning from doing, what would be the main takeaways from the Mumbai Metro Line 1 and Monorail projects, in terms of lessons learned?

Mr. Rajeev: The biggest positive would be that there was a dire need for a horizontal transport system that would connect areas asides from the vertical transport system of the rail network. Once these dots are connected, Mumbai would have a seamless transport experience. In addition, merely constructing Metro lines will not be enough. Public transport solutions need to include first and last-mile connectivity options for people so that the real shifts happen from private vehicles to the public transport system which ultimately reduces congestion.

What technical, financial, logistic, and project management challenges did you have to deal with to make Metro and other associated projects one of the best urban mass rapid transit systems in the country?

Mr. Rajeev: The biggest challenge is to keep Mumbai functioning while it is being upgraded. A megapolis like Mumbai cannot stop even for a day. To construct a world-class infrastructure model with this level of population density, it certainly will be an example for the world as hardly any country has been able to achieve such a feat in such a short time. You need the best of the contractors, consultant experts, technology and certainly good financial resources.

Recently MMRDA has terminated major civil contracts awarded to Simplex Infrastructure and RCC-MBZ JV for Metro 2A and Metro 7.  Will this action affect the commissioning deadline of these lines?  When will both lines be opened for the public?

Mr. Rajeev: The termination was done precisely for the reason of getting things done on time. The deadlines were not followed by the contractors despite reminders and notices. We were left with no other option. The aim is and will be to complete the projects on time. We have planned to open these two lines— Metro 7 and Metro 2A— in 2020.

Kindly highlight our readers with the current progress of all metro lines, attached carsheds and road infrastructure projects? And also tell us about deadlines fixed to commence commercial operation on these lines for the public.

Mr. Rajeev: Status of the current progress of all lines of Mumbai Metro Rail project are as under:

When will you receive the first Metro trainset from BEML? Any additional features you would like to highlight here that differentiate them from metro trains already deployed in other cities.

Mr. Rajeev: The first train set would be delivered to us by BEML in August 2020. As far as the special features are concerned, the rakes will be India's first indigenously-developed driverless trains for unattended train operations. Also first of its kind initiative in the country, there will be a dedicated space for a cycle stands inside each coach. There will also be a dedicated wheelchair space and the total capacity of each coach will be approximately 380 commuters with a total of 2,280 passengers on every six-car train. The coaches will also have a distinctive colour scheme, both interior as well as exterior, for each Metro line.

What are the salient features of the Mumbai Ropeway project? Please tell us about its design and construction features and current progress in the project.

Mr. Rajeev: The ropeway from Mahavir Nagar to Gorai Village island will have eight stations with access to crucial areas like Charkop and Pagoda. This 7.2 km long corridor will save much time as people have to take ferries to cross the 1.8 km wide Gorai creek to reach Gorai island or Pagoda. The speed of these cable cars will be 1km every two minutes. The cars are expected to carry around 3,000 passengers every hour in the peak direction. The system can also be designed to carry up to 5,000 passengers. These will be mono cable detachable Gondola which can run on single cable wire and can be detached to change direction.

What are your views on the contents we cover in Urban Transport News publications i.e. online news portal and bi-monthly magazine?

Mr. Rajeev: An online portal and magazine dedicated to the transport system is an excellent idea. In a country that's progressing at frantic speed, infrastructure and transport are what enable people to keep pace with the progress. The portal focuses on all the important aspects and the latest trends and news about transport. I must congratulate you for providing this platform.

Anything else you want to share with our readers.

Mr. Rajeev: The MMRDA has always strived to make MMR a destination for economic activity by promoting infrastructure development and improving the quality of life. Currently, it is executing projects worth Rs 1.5 lakh crores in the metropolitan area. MMRDA is working on several different projects of transport, infrastructure, environment, and other additional innovations to give the city an altogether different look and make Mumbai stand by its name of the Maximum City. Mumbai of 2026 will be a completely improved city so far as mobility is concerned, that is my promise.

The interview of Mr. RA Rajeev will also be featured in the March 2020 Edition of Urban Transport Infrastructure Magazine which will be focused on Mumbai's Urban Transportation Projects and Analysis of Union Budget 2020-21 for Rail & Transport Sector.