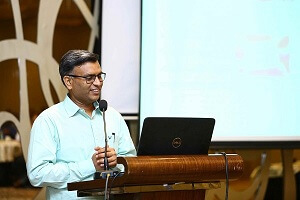 Congratulations! You must be feeling proud and happy after the commissioning of the Blue Line of Phase 1 of the Chennai Metro. Looking back, how would you rate the performance of the project team in achieving this milestone, after surmounting innumerable roadblocks?

The initial cost estimate of Rs 14,000 crores, when compared to the final cost of over 20,000 crores represents an overrun of more than 40%. We know that the foreign exchange rate escalation represents a substantial part of this overrun. What factors, apart from this variation, would you attribute the overrun to? By hindsight, do you feel would your planning for Phase 2 cover any particular aspect that didn’t go as well as expected in Phase 1?

Mr. Bansal: The project cost sanctioned in 2009 is Rs.14,600 cr for the entire Phase I and it is estimated that the completion cost can go up to Rs. 19,058 cr, which is 30% over the sanctioned cost. The reasons for the cost overrun are mainly an increase in land cost, variations to the contracts (approx. 5% of the original cost), price escalation, foreign exchange fluctuation (4%), etc. The variation to contracts include the re-tendering of terminated contracts and the execution of emergency works. The increase in land cost about 12% on the original cost is estimated on considering the enhanced compensation claims, the actual requirement of lands. During estimation, an expenditure of about 4% of the sanctioned cost was proposed for property development. However, it is highlighted that Rs. 19,058 crores are only an updation of the project cost and also, as the Phase - 1 project is nearing completion, cost expended till date is only 12% over the sanctioned cost of Rs. 14,600 crores. Factors affecting apart from variation are Price variation, Delays in completion of the project due to land acquisition, the existing geology of mixed ground condition in Chennai had adversely affected the progress of tunnelling work, limited availability of worksites and difficult situation of road traffic diversions, limited time of disposals of mucks etc., apart from non-performance by the contractor, Design built Contract. Based on the experience& lesson learned from phase 1 all the above factors have been duly considered with proper planning including detailed design by CMRL along with, hybrid BOQ contracts including more transparency for timely execution of work.

Some of the big names in the construction industry were associated with this project that has just been completed. There are also reported instances of non-fulfillment of obligations in some cases leading to drastic measures, having been taken. Frankly, could the terms of the construction contracts been made better, looking at them from hindsight?

Mr. Bansal: There is no solution for non-performance in any contract. Most of the problems has been resolved by more transparency with CMRL in future contracts in terms of Build contract with CMRL design rather than Design and built contract

Talking of learning from doing, what would be the main takeaways from the Phase 1 project, in terms of “lessons learnt?”

Mr. Bansal: Our main takeaways from the Phase 1 project are as under-

Mixed Ground Condition: To be determined more preciously at the closer interval while the geotechnical investigation

All the learnings will be taken care of forthcoming projects. Project Management tool BIM-Building Information Module Technology will be used for future projects.

What would you rate as the single most positive aspect of this incredible journey? The public transport in this city, though it is one of the best-connected in India, is overburdened. Looking ahead, will the Metro make a substantial difference?

Mr. Bansal: The most positive aspect of this incredible journey is the co-operation by the Chennai public to support CMRL by completing Phase 1. Chennai city has witnessed the rapid growth of population and vehicles. The population of Chennai was 8.9 million as per the 2011 census compared to 7.04 million in the 2001 census i.e. 2.37% growth. Similarly, the vehicular population of Chennai has shown a compound annual growth rate of 10%. Currently, there are around 5.39 million vehicles in the city. The city is predominately served by a bus fleet of around 3720 buses and the suburbs are supported by suburban Rail Network and an elevated suburban rail (MRTS). The present share of public transport for Chennai city is 28.4% and its share has been declining steadily. Government of Tamil Nadu (GoTN) endeavours to increase the share of Public Transport to 46% by 2026. Metro Rail system will play an important role in decongesting the traffic and enhancing the share of public transport in the city. Metro Rail will be a-

What would be your vision of a comprehensive concept to ease urban mobility in a sprawling and fat expanding urban megapolis like Chennai.  There are initiatives in some cities in Europe and the US, apart from Japan, to exploit the digital environment, like mobile apps, to include connections to feeder services, other forms of public transport, and even booking parking space. Your comments on this are welcome.

Mr. Bansal: Chennai, a fast-growing city is experiencing a variety of challenges. Traffic is one of the most significant challenges which the city is facing, congested roads, pollution are a strain on the environment and the overall quality of life. Strategies and measures are being devised across various cities in the world. Some of the notable solutions include, Electronic Journey Planner being widely followed in London, where the real-time information like congestion/traffic on a particular road, location and time of public transport systems, parking space is made available through an app called Journey Planner, through which the public can plan and opt for any kind of public transport systems. Public Light Bus in Hong kong also known as mini bus, complement the standard Hong Kong bus lines, serving areas that are hard to reach efficiently. With a  carrying capacity of 16 Nos theses buses are typically faster and are more efficient with higher frequency.

It is a major solution to overcome the last mile connectivity issues. Integrative Public Transport Model – Copenhagen is an integrative system that aims to reduce traffic congestion. It brings together various transport operators in a city, through a common ticketing platform which makes things easier. Hangzhou: Public Cycling System is one of the world’s largest public bike-sharing programmes. The city boasts 67,000 public bikes with 3,000 service points and had an average daily renting volume of 230,000 bikes in June 2013. One reason for the popularity of the system is its ease of use. Bikes can be rented using either a smart card that can also be used for other types of public transport, or with a cash deposit paid by non-local travellers who do not have a smart card. The convenience of the bike-renting system has proved popular for daily transport and also, in particular, for travelling between different public transport services. Some of the above proposals to ease urban mobility are under pipeline for implementation in Chennai City also.

To enhance the last mile connectivity for Metro Rail system, feeder systems like mini-buses, cycles, auto, and share cabs are made available. Further, Greater Chennai Corporation is planning for an enhanced bicycle system in the city with 4000 cycles with 240 docking stations across the city, which will encourage people to use bicycles for short commuting. Planning is underway to integrate various public transport operators at the city level. The use of digital medium extensively to effectuate the above proposals would be an underlying factor.

With the Chennai Metro Rail app, you can check out the nearest metro station linked to in Google Map, modes of transportation to reach any metro station, essential information about the station, platforms, details on routes have taken & in-between stations, corresponding Metro fares, Parking fares for all vehicles, Train timings, Feeder Service available at stations, Where to stay & dine.

Mr. Bansal: CMRL Mobile app is a dedicated application to provide you with a comfortable journey experience every time you use the metro rail service. The precise information and creative info-graphics help you grasp details on the go. CMRL had recently engaged vehicles for last-mile connectivity to the passengers seamlessly from their home to the destination and back. The integration of last-mile connectivity, Parking availability and booking is under development in CMRL Mobile App for passenger convenience. In addition to this, CMRL has also initiated to upgrade the existing infrastructure to accept QR tickets from CMRL Mobile App and also to accept Open Loop Bank  EMV/ Rupay cards for payments. This will encourage cashless transactions and also save on the procurement and sale of Smart cards for CMRL. For the passenger, the need to go to a Ticket counter would be reduced.

The estimate for the Phase II project has been trimmed by Rs 11,000 crores to Rs 69,000 crores. That means the reduced cost of building elevated stations as compared to underground ones more than offsets the increased cost of land acquisition for over ground transport. Are there other cost-cutting measures planned?

Mr. Bansal: Other measures were reduction in station box size both elevated and underground stations, Reduction in entry and exit structures along with nos etc., efforts are made to optimise the use of area by public as well as system installation. Due to the above measures there is substantial reduction in land acquisition. Urban Transport News: How has the Chennai Metro project fared in terms of sustainability of the environment? Any creditable achievement? Solar Power:

Anything else you want to share with our readers.

Last Mile Connectivity: CMRL has introduced last-mile connectivity for the benefit of Metro Passengers between Alandur Metro Station to DLF cyber city IT Park. At present, there are four air-conditioned tempo travellers plying between Alandur to DLF at an interval of 15 Minutes with a flat rate of Rs. 20/-.

FEEDERS SERVICES FOR INFOSYS: Infosys Buses have also been introduced from Alandur Metro Station to Mahendra City and Sholinganallur campus. A total of 6 trips are made in the morning, with 3 trips made each campus every day.

SHARE AUTO SERVICES: Share Auto services are available at 8 Metro Stations at a flat rate of Rs.5/- for a distance of in and around 3 Kms.

BICYCLE SCHEMES: Bi-Cycle Schemes have been introduced at all metro stations for the benefit of the passengers to promote a healthier and sustainable mode of transport. These have generated an overwhelming response.

BIKE RENTAL: Bikes are available for hire at 4 Metro Stations for the convenience of passengers for the last mile connectivity.

OFFICE RIDE Ford’s Corporate Shuttle Feeder Services called Office Ride have been launched at Alandur Metro Station to provide nodal connectivity from Metro Stations. A total of 5 vehicles with seating capacity for about 12 are available for now. Each vehicle under Office Ride will provide a Wi-Fi connected, air-conditioned environment, elevating daily commute to new levels of comfort and connectivity.

Is there anything about our publication (Urban Transport Infrastructure Journal) you think we could do better?

Mr. Bansal: CMRL has been fortunate to be received by the Media and Publications positively. We hope that Urban Transport Infrastructure Journal would continue to support the Chennai Metro Rail Project in the future as well.