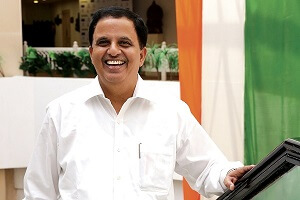 First, congratulations on the bagging award in the “Best Mass Transit System” category at 12th Urban Mobility India Conference from the Ministry of Housing & Urban Affairs, Govt. of India. Kindly tell our readers about some commuter-friendly initiatives that made “Lucknow Metro” the Best Mass Transit System in India.

Mr. Keshav: Thanks. It was a great moment for us. Our efforts and works have been recognised and appreciated by the GoI. I congratulate my UPMRC team for this wonderful achievement. As far as commuters and their convenience are concerned, we frequently get their feedback, analyse their needs and work accordingly to provide them ensure a great travel experience. We have world-class stations consisting of commuter-friendly features such as free Wi-Fi, lift, escalators, and automatic fare collection machines. Coaches of the train are also equipped with convenient features. Low noise inside the train, inter-car passage, LED lighting, and spaces for baby prams are some other prominent features. We have given special attention to wheelchair-bound passengers through wide passenger doors. Passengers’ safety and security is a great concern for us and we have special arrangements to ensure that.

Kindly tell our readers about the role of Uttar  Pradesh Metro Rail Corporation (UPMRC) and the main purpose behind renaming LMRC.

Mr. Keshav: UPMRC will execute various metro projects in all the cities of UP. The main purpose behind the renaming of the LMRC is to constitute a Single Special Purpose Vehicle (SPV) in place of the city-specific body. As per the directive of the Ministry of Housing & Urban Affairs (MoHUA), GoI, the GoUP approved the reconstitution of Lucknow Metro Rail Corporation Limited (LMRC) into a Single SPV named Uttar Pradesh Metro Rail Corporation Limited (UPMRC) for implementation of Metro Rail projects in various important cities of the state. The single SPV is constituted for better management and cost control purposes. This will help in standardization of various technical aspects. This will also help in the reduction of the cost of administration as well as duplicity of work.

Kanpur Metro Project: Tender for civil works of the priority section from IIT Kanpur to Moti Jheel has been awarded and Work commenced on 15.11.2019 in presence of Shri Yogi Adityanath, Hon’ble Chief Minister, UP and Ministers of Housing & Urban Planning, GoI. Tender for civil works in the priority section awarded to Afcon Infrastructure Limited. Tender for construction of Depot of corridor-1 awarded on 18.11.2019 and now work has been started. Combined tender for procurement of Rolling Stock and Signaling for Metro floated on 06.12.2019. Agra Metro Project: Tender for Detailed Design Consultants (DDC) has been awarded on 22nd October 2019 and the land acquisition is under process. Priority Corridor of approx. 06 Km length from Taj East Gate to Jama Masjid has also been selected which will have 03 elevated and 03 underground stations.  Meerut Metro:  DPR approved by GoUP for implementation on Equity Sharing Model and submitted to Ministry of Housing & Urban Affairs, GoI for approval on 24.01.2018.

What is the current status of proposed metro rail projects in other cities like Gorakhpur, Prayagraj and Varanasi?

Mr. Keshav: The DPR of these projects are under process.

When will the work on Charbagh Railway Station – Vasant Kunj corridor start?

Mr. Keshav: We have submitted the revised DPR of Lucknow Metro (East-West corridor) to the government of Uttar Pradesh and it is yet to be approved. The 11.098 km long East-West Corridor will connect from Charbagh to Vasant Kunj. The corridor will have 12 stations - Charbagh, Gautam Buddha Marg, Aminabad, Pandey Ganj, Lucknow City Railway Station, MedicalChauraha, Nawajganj, Thakurganj, Balaganj, Sarfarazganj, Musabagh and Vasant Kunj.

How are you planning the integration of present operational as well as future metro corridors of Lucknow Metro with other modes of public transport like Indian Railways, Bus, airport etc?

Mr. Keshav: Last-mile connectivity is one of the top priorities and in this direction we have been working with state authorities. We have signed MoU with Urban Mass Transit Company (UMTC) and Uber Company to meet the demand from Metro commuters for feeder services across the city. LMRC has also planned to hire E-rickshaws as feeder services because of their benefits to the environment. We have also been providing parking facilities at most of the stations in order to provide people with park and ride facilities.

What are your views on the contents we cover in Urban Transport News Publications i.e. online news portal and bi-monthly magazine?

Mr. Keshav: It’s a welcome step to provide specialized news through magazines and online portals. It helps authorized bodies to convey messages and communicate with stakeholders and the common man.  It also helps management to know the opinion and suggestions of common people which ultimately helps us upgrade and revisit our plan and system. At the same time, people become aware of the development in their cities with all the details. These platforms help establish real-time communication in this age of information.

Any other thing you want to share with our readers.

Mr. Keshav: We are on the journey to provide a smooth mobility option within the cities. Many projects are running simultaneously and we are planning this for other cities as well. Metro is a green mobility option and I would like to invite people to be a part of the sustainable development of the city and adopt this public transit system.