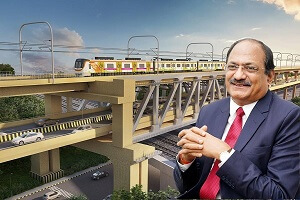 It has been seen that Maha Metro always prefers adopting new technology while planning and executing the project. How the same benefitted in terms of reducing the time and cost overrun?

Dr. Brijesh Dixit: We at Maha-Metro believe that construction of the metro rail projects now in the third decade of the 21st century should use the latest technology and technological innovations to ensure project execution within cost and timeline and with the highest level of quality standards. A case in point is indeed our adoption of the country’s first and global best practice of creating a digital project management platform using 5-Dimensional Building Information Modelling (5D BIM) integrated with SAP ERP and supported by Owner’s Support Office (OSO) which is a dedicated team responsible for efficient utilization of the digital project management platform. This unique 5-D BIM solution of Maha Metro has already proven to be an effective platform for efficient monitoring of project execution, enabling the execution of almost 25 km of metro network in just 50 months while saving 10% of the DPR Cost. All stages of metro project implementation right from planning, designing, construction, commissioning, handover operations & maintenance till closure could be visualized virtually through intelligent 3D Drawings with Time as 4th Dimension and Cost as 5th Dimension and then closely monitored helping in mitigating the key risk factors. The platform is located in “War Room” in one office at Nagpur, where all decisions can be taken instantly on a war footing.

What are the salient features of the Metro Neo? Please tell us about its design and construction features and current progress in the project.

Dr. Dixit: Over the last two decades metro rail systems are being implemented in about two dozen cities. This has given the demand for such systems from several other cities. Though the tier 2/3 cities are also getting increasingly transport gridlocked, the traffic on the roads measured in PHPDT (per hour per direction traffic) at around 10000-15000 does not justify the construction of expensive metro rail system. The Metro Neo has been conceptualized by Maha-Metro as an innovative, cost-effective, energy-efficient and eco-friendly system that is an ideal solution for such cities. It can be developed in such a modular way that in the future when the PHPDT increases, it can be upgraded into the light metro. The Metro Neo basically is an elevated Rubbered Tyred Metro System with overhead electric traction, where there is no track and signalling system and stations are very small and simple. All this brings down the cost to almost one-fourth of the heavy metro system. The idea is to make “Metro Experience” of safety, punctuality, reliability, accessibility, comfort, affordability and eco-friendliness available to tier 2/3 cities The detailed project report (DPR) of this Metro Neo system has been made by Maha-Metro for Nasik city which has been approved by the Maharashtra Government and sent to the Government of India for sanction. Other state governments too have shown keen interest in Metro Neo and recently Maha- Metro has been entrusted with the assignment to prepare DPR for Metro Neo in Warangal City by the Government of Telangana. Also, on 21st August 2019, MoHUA, Government of India has initiated the process of framing the Standard Specifications for Metro Neo for incremental implementation across the country with a clear focus of encouraging its implementation in Tier 2/3 cities across the country.

Tell us more about the Broad-Gauge Metro Project. In what way will it affect the integrated transport services in Nagpur?

Mr. Dixit: Broad Gauge Metro is again a unique concept being jointly conceptualized by Maha Metro and Indian Railways to bring satellite cities of Nagpur viz. Wardha, Narkhed, Bahandara and Ramtek much closer to Nagpur. The idea is to wean away commuters from these cities travelling to Nagpur every day by road to metro thus operating as feeder service to that of metro enhancing the ridership. It will be a win-win for all stakeholders including Indian Railways as their slow sectional passenger trains in these stations can stop. The distances and stations on planned routes of Broad-Gauge Metro will be Wardha (78.8 km, 12 stations), Narkhed (85.53 km, 11 stations), Ramtek (41.6 km, 8 stations) and Bhandara Road (62.7 km, 11 stations). The maximum design speed of Broad-Gauge Metro 120/160 km per hour with metro like the quality of service. The Memorandum of Undertaking (MoU) for Broad Gauge Metro Project was signed between Maha-Metro and Indian Railways (Railway Board) and Maha-Metro on 16th July 2018 and the DPR of the project prepared for the cost of the Rs 418 Crore cleared by the Railway Board and soon it will be submitted to Ministry of Housing and Urban Affairs Government of India for sanction.

Kindly highlight recent development in Nagpur and Pune Metro projects. Tell our readers about the deadlines of various projects.

Dr. Dixit: The Year 2019 has been momentous for us in the Maha-Metro team. Commercial train operations on its 13.5 km section of Orange Line was inaugurated by Honorable Prime Minister on 7th March. In less than six months thereafter in September 2019, another 11 km stretch of Aqua Line at Nagpur was certified fit for commercial operation by Commissioner Metro Rail Safety (CMRS).  With this, the Maha-Metro Nagpur team has in a record time of 50 months successfully completed 25 km of total network covering two-third of total project length thus achieving an average of 1km every two months which is a benchmark for a metro project. Like 2019 was the year of “Tryst with Metro” for citizens of Nagpur, the year 2020 will be the “Year of Metro” in Pune. The work on priority sections of Reach 1 and Reach 2 of the Nagpur Metro Rail project is progressing fast and the trial run on the priority section is likely to start before the end of 2019. Commercial operations will begin after CMRS certifications of the sections. Equally importantly, the construction work on challenging underground sections using Tunnel Boring Machines (TBM) has already started in real earnest. The entire elevated stretch of the Pune Metro Rail project shall be completed in 2021 and the complete project including underground stretch by 2022.

How are you integrating the metro rail corridor with other modes of public transport like Railways, Bus etc.?

Dr. Dixit: Metro rail systems face the challenge of reaching expected ridership and make metro the preferred mode of transport. Maha-Metro is seized of this challenge and is making all-out efforts to ensure efficient, effective and seamless integration with other modes of transport in both projects at Nagpur and Pune. Not only that we are consciously trying to enhance footfalls by creating commercial hubs and malls etc. Maha-Metro team has created multi-modal transport hubs at key stations of Nagpur and Pune Metro and has connected metro rail with the airport, railway stations and inter-state, inter-city and intra-city bus terminus. Further, Maha-Metro has ensured provision of bicycle parking and wide footpath access in and around the stations for ease of pedestrians, it has effectively integrated IPT (Intermediate Public Transport - Auto Rickshaws and E-Rickshaws) at stations, as well as creating infrastructure in form of pick up drop off bays for organized seamless movement. Another key integration measure has been proposed for feeder buses at all stations in partnership with municipal corporations as well as battery operated feeder buses in partnership with private sector operators.

What are the various strategies to make metro projects more sustainable?

Dr. Dixit: Maha-Metro for its twin projects at Nagpur and Pune is trying to ensure financial sustainability by various means aimed at constructing and maintaining the metro rail at the lowest possible cost and maximizing the revenues, particularly non-farebox revenue. As regards cost optimization, it has already ensured that Nagpur Metro is constructed at a cost 10% lower than the DPR cost. As to energy cost, Maha-Metro is already on way to achieve the target of meeting 65% of its energy needs including for traction by solar power which will not only cleaner and greener power but substantially cheaper also being done on RESCO model. While cost optimization is necessary to embark on the path of financial sustainability, the key ingredient of sustainability is the maximization of its non-fare box revenue. It has been consistently pursuing the path of achieving 60% of total revenue both at Nagpur and Pune through a mix of non-fare box revenues. The specific measures include but are not limited to large scale value capture from property development, licensing of property business spaces in station box area on a much larger scale than what has happened in the country so far and using innovative advertising across stations, depots and other metro structures. In addition, Maha - Metro also got a boost

What are your views on developing the new metro ecosystem in India?

Dr. Dixit: The first two decades of the 21st century have witnessed the transformation of urban transport in major Indian cities by way of development of a new metro eco-system in the country. However, Metro Rail has not come into the country too soon. In less than a decade, India will be home to 600 million urban population and in less than three decades from now out of the projected 1.5 billion population, there will be more Indians living in cities than in villages. It is in this context that the development of a new metro eco-system must be seen. At the beginning of the 21st century, all that the country had a small metro rail system in Kolkata. Then came 2002 when the first 8.5 km section of the metro rail was opened in Delhi. The country has not looked back since then and in less than 18 years, today India has over 650 km of metro rail in 18 cities. This is the largest development of metro rail anywhere in the world during the period outside China. And, this is just the beginning. During the decade ahead more than 1500 km of additional metro rail will be added in the country. Nearly 1000 km of that is already either in construction or in an advanced stage of planning. This will make the India of tomorrow drastically different from the India of yesterday. The new metro rail eco-system has a distinct role to play in ensuring that urban transport of the country is safe, fast, accessible, comfortable, affordable, eco-friendly, inclusive and sustainable. The metro rail-based urban transport infrastructure must seamlessly integrate with other modes of public transport i.e. high-quality bus service, BRTS corridors where they fit in, Metro Neo type systems in 2/3 tier cities. The public transport as per the new definition of development has to be such that it is the preferred mode of transport even for the affluent classes. However, demand-side issues also need to be taken up. There is a strong case for ensuring behavioral changes in making more and more people take metro rail and other complementary public transport through policy prescriptions backed by concrete actions.

What are your views on the contents we covered in Urban Transport News publications i.e. online news portal and bi-monthly magazine?

Dr. Dixit: Urban Transport News publications – both online news portal and bi-monthly magazine, have been regularly covering various issues related to infrastructure projects including railways, and urban mobility. Especially issues related to the metro rail segment have been very well covered. The various aspects related to the metro rail industry and its benefits to society have also been included in its issues. The Urban Transport Infrastructure magazine and the portal also regularly feature interviews of prominent personalities related to infrastructure and similar such sectors. Related news at international levels is also covered at both levels.