Ivolga changing the concept of modern suburban trains in Moscow 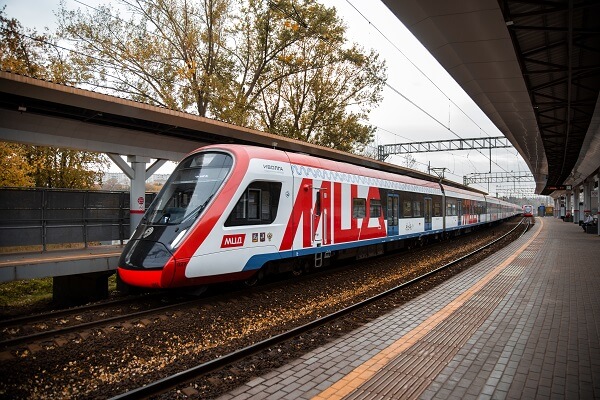 Moscow, like other global metropolises, pays a great deal of attention to the development of the public transport system, trying to make it fast, comfortable and safe. This is one of the modern challenges, as residents will not choose public transport if it does not meet their expectations and perceptions of convenience and comfort. Thinking how to convert classic suburban trains into modern urban transport, it became obvious that the existing rolling stock needed to be updated. The suburban railway transit, which has existed for many years, is outdated. The comfort and service did not meet the modern challenges of the time. The city faced a serious challenge to launch a new surface metro that would turn over the old concept of suburban trains. This is how Moscow Central Diameters and the new «Ivolga» urban trains appeared.

The Ivolga train was designed from scratch and assembled at the Tver Carriage Works (TVZ, part of Transmashholding) specifically for Moscow Central Diameters. «Ivolga» was developed as an urban-type train capable of carrying passengers over short distances. Such a train should accelerate quickly and brake smoothly, have all the necessary comfort options, and also ensure quick boarding and disembarking of passengers at any time of the year.

The Ivolga train was developed by Russian designers and is largely assembled from components produced by Russian enterprises. 90% of “Ivolga” parts are domestically manufactured, including hitches, intercar crossings, traction equipment, brakes. In terms of technical, operational and consumer characteristics, the Ivolga train surpasses its foreign counterparts i.e. in the number of cars per one train, acceleration coefficient up to 60 km/h, higher passenger capacity with a shorter car length, etc.

For the safety of passengers and the train crew in case of a collision with an obstacle, the head and intermediate carriages of the train are equipped with modular blocks (crash modules). When creating Ivolga, special attention was paid to the reliability of the braking system. The train is equipped with a combined braking system, ensuring electrodynamic and electro-pneumatic braking.

The operational characteristics of the train and its economic efficiency have no analogues among the models presented on the domestic market. Due to the use of an asynchronous motor and a regenerative brake in the structure of the train, the reliability and efficiency (reduction in energy consumption by 15-20% compared to the collector drive) in operation are significantly increased, the labor intensity of maintenance is reduced, and its interval is increased. All this together can significantly reduce operating costs.

To improve the smoothness of the ride in the undercarriages of electric train cars, cylindrical springs were replaced with pneumatic springs, the use of which, depending on the load of the car, provides a given value of the floor level relative to the platforms, thereby increasing the convenience of boarding and disembarking for all passengers. This is a vital issue for passengers with reduced mobility. The calculated coefficient of smoothness in the «Ivolga» is no more than 3.0 (while its usual rate is less than 3.25).

When developing the interior, the designers were asked to design the interior so that it would be perceived as a single and light space. The seats are located in opposite directions to accommodate more passengers. This arrangement is the most practical for short-distance travels. Also, when seating face to face, passengers always sit by the window. The location of the doors closer to the middle of the passenger compartment contributes to an even distribution of passengers along the length of the train.

Doorways in new trains have been expanded to 140 cm. Wide doors and the absence of enclosed platforms speed up the boarding and disembarkation of passengers by 10-15%. Thanks to this, the train does not hamper at stations and the rate of train turnover on the route does not decrease. And to cut off the cold or warm air from the street, air curtains appeared. They are activated only at stops, while passengers are getting on and off the train. For the convenience of standing passengers, the carriages have special handrails with a "warm" coating at the level of the seatbacks and at the level of the upper crossbar.

Spending on average more than 40 minutes a day on public transport, the modern passenger wants to benefit from the travel time: check e-mail, shop in the online store, or read a book. For these purposes, Ivolga trains have Wi-Fi hotspots and charging points for gadgets.

While creating the Ivolga train, the designers anticipated the need to protect passengers from viruses and bacteria. The Ivolga interior is equipped with an air disinfection system, which has demonstrated its effectiveness during a pandemic.

The cleaning module is needed in order to reduce the risks to the health of passengers. In winter, 10 thousand cubic meters of air is supplied to each person per hour, in summer – 20 thousand cubic meters. Air from the street enters the climatic chambers, which are installed on the roof at both ends of the car. In the chamber, outside air is mixed with the air from the passenger compartment, disinfected using hard UV radiation and supplied back to the passenger compartment. The system, among other things, is capable of deactivating viruses of the group, including COVID-19. Its efficiency and reliability are confirmed by tests of the Federal Service for Supervision of Consumer Rights Protection and Human Welfare.

Ivolga trains match the best foreign analogues and are changing the idea of ​​suburban trains due to high standards of comfort and safety.